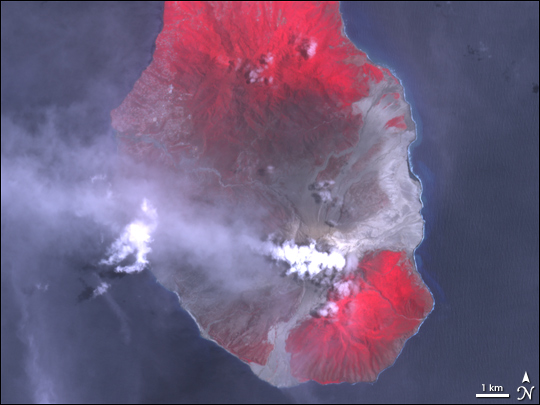 The Advanced Spaceborne Thermal Emission and Reflection Radiometer (ASTER) on NASA’s Terra satellite caught the Soufriere Hills Volcano in the act of emitting a plume on June 2, 2006. The volcano had intermittently emitted plumes for months by the time this image was collected, and the volcano’s lava dome had collapsed. Resulting mudflows may have reached the sea.

In this false-color image, vegetation appears red. The vegetation is more vibrant at lower elevations (bright red) and sparse nearer the summit of the volcano (dark red). The volcanic plume appears in grey, and blows westward over the Caribbean. A few bright white clouds hover overhead.

The Soufriere Hills Volcano is a stratovolcano on the island of Montserrat in the West Indies. The volcano is comprised of layers of lava, ash, and rocks from previous eruptions, all hardened and cemented. Beginning in 1995, eruptions grew from ash plumes to severe flows of volcanic material that destroyed Montserrat’s capital city of Plymouth and forced authorities to evacuate the southern half of the island.