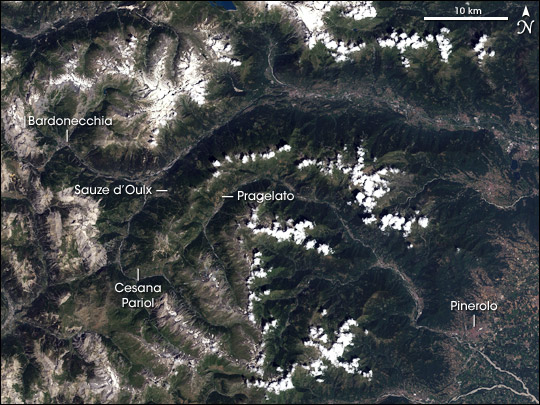 This image shows the location of the mountain events in the Alps west of Turin. A few of the forested mountains are capped, but not blanketed, by snow in this image from July 30, 2001. The lower elevations are covered in lush green vegetation, with higher elevations lighter green. The Olympic venues, some of which are shown here, were spread through the mountains around the Dora Riparia River. Bardonecchia on the far left hosted the snowboarding events, and freestyle and alpine skiing competitions were held farther down the valley in Sauze d’Oulx. To the south, bobsled, luge, and skeleton were at Cesana Pariol. Pragelato, in the center of the image, hosted Nordic, ski jumping and cross-country skiing events. Curling competitions were held at Pinerolo in the foothills of the Alps. Hockey, speed skating, and figure skating events were held in Turino, on the plain east of the area shown in this image.

This image was taken by the Landsat EMT+ instrument. Other images taken by astronauts on board the International Space Station and by the Ikonos satellite provide an additional perspective on the venues.