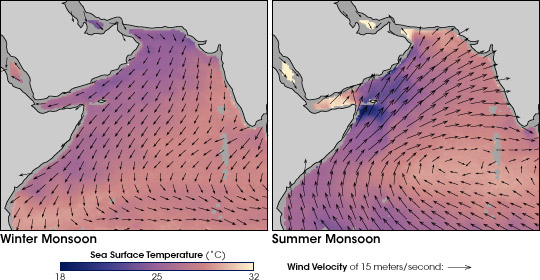 Over the Arabian Sea, monsoon winds alternately blow from the northeast and the southwest, reversing their dominant direction with the seasons. In the winter, the winds blow from Southwest Asia toward the sea. In the summer, the winds blow from the sea toward land, bringing heavy rain to India, Pakistan, Bangladesh, Myanmar, and neighboring countries. Not only does this seasonal cycle affect weather patterns on land, it also affects the Arabian Sea itself. Because the Arabian Sea is landlocked in the north, it is largely cut off from large-scale ocean circulation patterns, allowing local winds to play a significant role in ocean temperatures.

This image shows both wind direction (arrows) and ocean temperatures (colors). Dark purple indicates cooler sea surface temperatures, and pinkish-yellow indicates warmer temperatures. Cool waters are most prominent near the Arabian Peninsula during the summer monsoon. During the summer monsoon, strong, steady winds push water on the sea surface toward land. In response to the intensified winds and resulting surface-water movement, cooler waters rise up from the ocean depths. Although temperature variations still exist during the winter monsoon, the temperature gradient is not as extreme.

Joaquim Goés, an oceanographer and remote-sensing expert from Bigelow Laboratory for Ocean Sciences in West Boothbay Harbor, Maine, studies the Southwest Asian Monsoon. He and his colleagues discovered an increase in the intensity of the summer monsoon winds since 1997 after satellite data revealed large increases in phytoplankton (tiny ocean plants) in the Arabian Sea. The stronger winds drove greater upwelling of deep, cool water. Upwelling of cool waters affects phytoplankton growth because the cool waters are rich in nutrients. To learn more about the Southwest Asian Monsoon, its effects on the Arabian Sea, and why it has strengthened since 1997, visit Winds Connect Snow to Sea.

Maps by Robert Simmon, based on data provided by the Bigelow Laboratory for Ocean Sciences