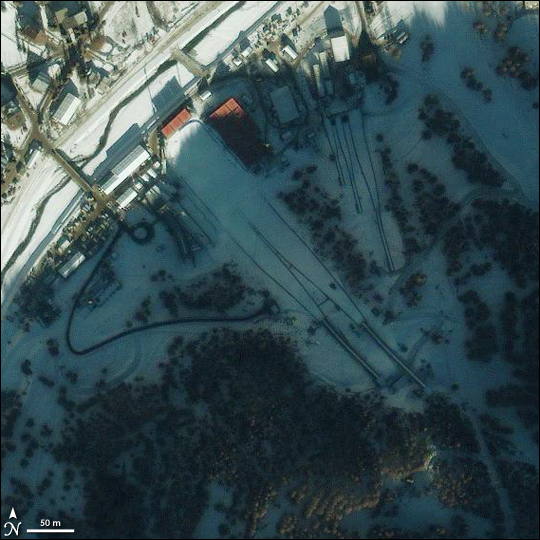 The stage was set for the XX Olympic Winter Games in 2006 when the Ikonos satellite captured this image of Pragelato, Italy, on January 10, 2006. Located in the Alps about 120 kilometers from Torino, Pragelato was the site of Nordic skiing events: the ski jump, cross-country skiing, and the Nordic combined. The two Olympic jumps shown in the center of this image are the Large Hill at 120 meters in height and the Normal Hill at 90 meters in height. The narrow jumps widen into v-shaped landing areas. Three small training jumps sit to the right of the competition jumps. The cross-country skiing track is visible in the large image to the left of the jumps.

In addition to being used for the ski jumping competition, the jumps form the first stage of the Nordic combined event. The three Nordic combined events—individual Gunderson, individual sprint, and team—require athletes to complete a ski jump, then race to the finish line over a cross-country ski course. The start time on the cross-country race is determined by how well the athletes perform their jumps, with the best starting first. The individual Gunderson (held on February 11) sends competitors off the 90-meter jump twice for a combined score, followed by a cross-country race of 15 kilometers. In the sprint (February 21), athletes jump off the Large Hill and race through a 7.5-kilometer cross-country course. In the team event (February 15-16), the jump is followed by a “4 by 5-kilometer” relay (4 team members each race 5 kilometers).

Images of the Olympic Village and other event venues are available in the 2006 Winter Olympics Explorer provided by GeoEye. Other images taken by astronauts on board the International Space Station and by the Landsat satellite provide an additional perspective on the venues.