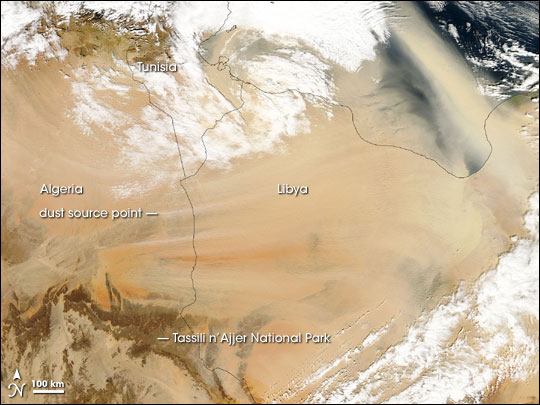 In this image, the dust storm appears as tendrils and ripples of pale beige, partially obscuring the underlying land and ocean features. The dust is not uniformly thick, so while part of the Mediterranean is almost completely hidden by a thick band of dust (in the upper right corner of the image), a burnt-orange-colored sliver of land still peeks out from under the dust in eastern Algeria and western Libya. Dust storms often originate from discrete source points, and this image shows several source points, one of which is annotated, in eastern Algeria. Additional dust appears to come from points farther west.

As the world’s largest sandy desert, the Sahara produces many of the planet’s dust storms. Because the dust travels for hundreds to thousands of kilometers, its effects can be far reaching. According to a news report in The Jerusalem Post, dust storms now blow from Africa into Israel throughout the year, rather than just in the spring and summer, and climate change and desertification could exacerbate such storms in the coming decades.

South of the dust storm, this picture shows part of the Tassili n’Ajjer National Park in southeastern Algeria. The park stands out from its surroundings due in part to its mountainous landscape. This high plateau in the middle of the Sahara sports some of the world’s most important groupings of prehistoric cave art, recording climate change and animal migrations over the past several thousand years.

A dust storm swept over Algeria, Tunisia, Libya, and the Mediterranean in late February 2006.