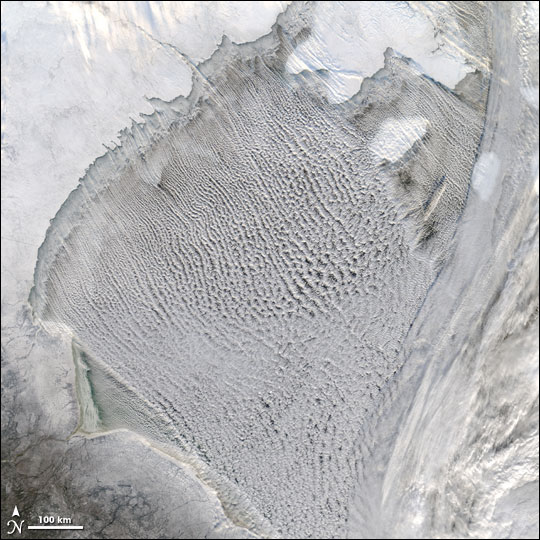 The normally pristine Hudson Bay was suddenly paved over in late November 2005. This rapid “urbanization” wasn’t accomplished with asphalt or concrete, but with clouds. Heat, moisture, and wind collaborated over the bay to build “cloud streets,” parallel lines of clouds that align with the wind.

The Moderate Resolution Imaging Spectroradiometer (MODIS) flying onboard the Terra satellite captured this image of Hudson Bay on November 21, 2005. In this image, lines of clouds sweep off the surface of the ice along the bay’s northwest edge and head southeast over the water, billowing out to form puffy clouds along irregular lines.

Cloud streets have been observed frequently, both by airplane and satellite. These clouds are really cumulous clouds with flat bases and fluffy tops resembling giant heads of cauliflower. Cumulous clouds result from thermals, or rising columns of warmed air. Thermals themselves form when the ground surface is a little warmer than its surroundings. If the thermal produces a consistent flow of warm air, and steady wind carries that air away, lines of clouds can form along the direction of the wind. An irregular surface like the edge of the sea ice observed in this image may provide the perfect conditions for creating steady streams of warm air interspersed with areas of cooler air.

These cloud streets are more or less straight, but some cloud streets assume paisley patterns when the wind driving the clouds encounters an obstacle. Those cloud formations are known as von Karman vortex streets.