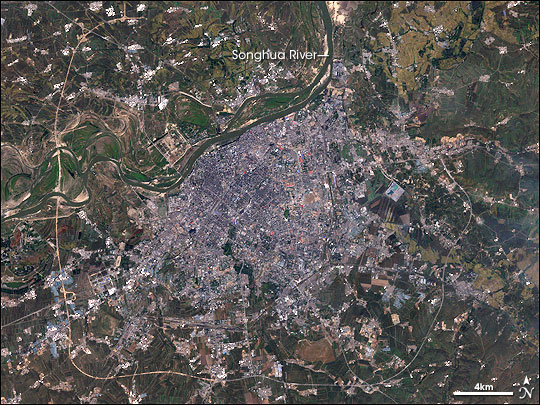 The Songhua River flows north out of the Changbai Mountains, cutting across the Manchurian Plain of northern China. As China’s northernmost river system, the Songhua is an important artery in transporting agricultural products grown on the plain. On its northward course, the river wends its way past Harbin, the capital of China’s Heilongjiang Province, where it provides another lifeline. As much as 80 percent of the city’s public water supply comes directly from the river. That supply was cut off after an explosion at a petrochemical plant dumped 100 tons of benzene and other harmful chemicals into the river on November 13, 2005. As the chemical slick reached the city, officials turned off water supplies to prevent illness until the chemicals passed.

This Landsat image, taken on September 21, 2001, shows Harbin’s relationship with the Songhua. The city extends south and east from the banks of the river. A few smaller communities line the opposite bank of the river, connected by a maze of tan dirt roads. The city itself appears to be densely populated with a few small green squares of park or open land.

After passing through Harbin, the Songhua flows north to the Russian border where it meets the Amur River. The Amur River runs north through Russia before emptying into the Tartarskiy Proliv, a narrow strait connecting the Sea of Japan to the Sea of Okhotsk. The areas touched by both the Songhua and the Amur may be contaminated before the chemicals dissipate.

According to the U.S. Environmental Protection Agency, the primary pollutant, benzene, is a clear liquid that has a strong smell. It is highly flammable and can affect the nervous and immune systems in the short term or cause cancer after long-term exposure. The World Health Organization recommends that no more than 10 micrograms of benzene be permitted in each liter of drinking water. The Chinese industrial accident put about 100 times that amount into the Songhua. Though the chemical can be cleaned from the water, benzene evaporates quickly on its own or it may be degraded by microbes in the water.

The pollutants entered the water about 200 miles upstream from Harbin in Jilin, causing a fifty-mile slick, the New York Times reported. The slick passed through Harbin by November 25, and was expected to enter Russia around December 9.