Record Rain and Drought in the East 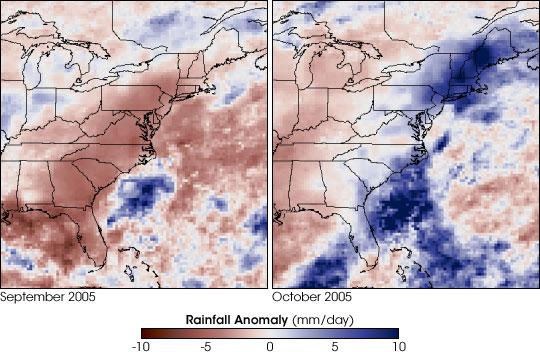 The eastern United States baked under clear and sunny skies through September 2005. Land surface temperatures—the temperature the ground appears to be when you walk outside with bare feet—soared to their highest levels on record for any September, while the entire United States languished through the fourth warmest September on record, according to the National Climate Data Center. Indeed, the month was more an extension of summer than an introduction to fall. High temperatures were accompanied by unusual dryness. For Georgia, South Carolina, Maryland, and Washington, D.C., September 2005 was the driest September on record, and 18 percent of the nation lapsed into moderate to extreme drought.

Things can change very quickly: Easterners were drenched in October. In New England, where most states received well over 25 centimeters (10 inches) of rain during the month, October 2005 was the wettest October on record. The rainfall caused widespread flooding.

The contrast between rainfall in September and October is illustrated by the above images. The images show rainfall totals compared to average conditions for each month. In September, nearly the entire East Coast is colored red, showing where less rain fell than average. By October, the record lows gave way to blue tones, pointing to more rain than average. A circle of deep blue rests over New England, where significantly more rain fell than normal. The images were made using rainfall totals collected by the Tropical Rainfall Measuring Mission (TRMM) satellite.

According to global climate models, flip-flops between record dry and record wet months may increase in a warmer world. Models predict that as temperatures rise, cycles of drought and flood could become increasingly intense. As the planet warms, the existing temperature difference between the poles and equator may decrease. Because the equator-versus-pole temperature difference often drives storm formation, a decrease in that difference may mean that fewer storms form. At the same time, the amount of water vapor in the air may increase in a warmer world, which could make storms more intense. The combined result of these climate shifts may be that fewer storms form, but those that do form become large storms. More of a region’s rain could fall in isolated large events, with longer dry spells in between.