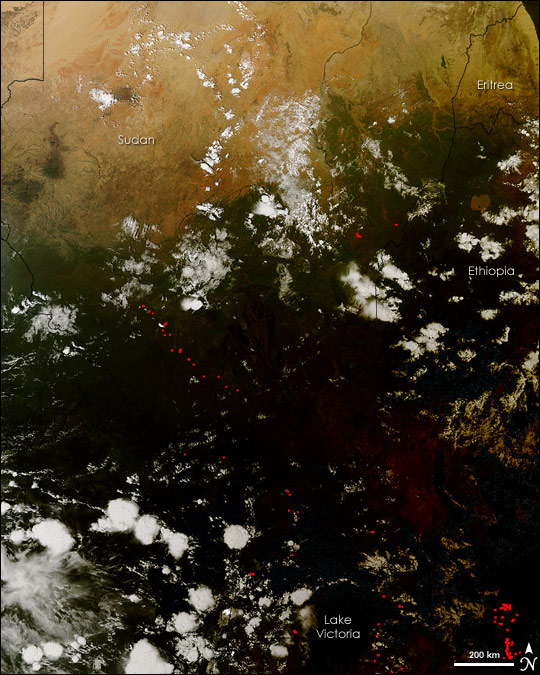 Eastern Africa was cloaked in darkness when the Moderate Resolution Imaging Spectroradiometer (MODIS) on NASA’s Aqua satellite caught this image on October 3, 2005. The inky blackness that covers much of Ethiopia, Kenya, Uganda, and parts of Sudan and the Democratic Republic of the Congo in this image was caused when the Moon crossed in front of the Sun in an annular solar eclipse. During such an eclipse, the Sun is visible as a fiery circle around the black disk of the moon.

In the dimness beneath the Moon’s shadow, very little light remained for MODIS to capture this image. Under normal conditions, the land in the lower half of the image is a lush green, with patches of tan where the land is bare. Here, the tan areas have a red tint in the low light, while the green is completely black. Red dots show where fires were burning in vegetated areas. In the top half of the image, the orange of the Sahara Desert is shown in darker tones than normal. Only in the upper right corner of the image, where full daylight has returned, does the desert look normal.

Gradations of darkness within the shadowed area can be seen in the clouds. Bright white clouds reflect light well, so they are easily visible, even in the shadow. Since some light reached the Earth, the clouds remain bright along the outer edges of the shadowed region. As the eclipse progressed, the Moon’s shadow traveled southeast across the globe. When this image was taken, the deepest shadow lay over Kenya in the lower right corner of the image. Here the clouds are darker, an indication that there was less light to reflect back to the satellite.

The large image provided above has a resolution of 500 meters per pixel. It is available in additional resolutions from the MODIS Rapid Response Team. Tiny blue flecks in the large image are defects in the data.

The Moon cast its shadow over the Earth on October 3, 2005, leaving parts of Africa and Europe in darkness.

On February 20, 2008, sky gazers from the central Pacific to Africa saw the full Moon turn a striking red as it passed into Earth’s shadow. From space, the lunar eclipse deepened the darkness of the night. The Defense Meteorological Satellite Program’s (DMSP) F16 satellite captured this view of the eclipse as the satellite flew over the nighttime side of the Earth in a series of overpasses.