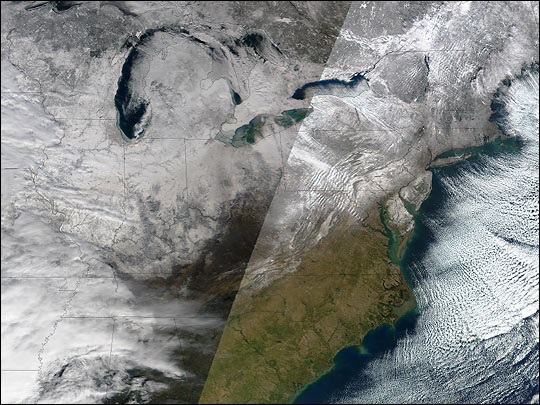 Solar eclipses occur when the Moon passes between the Earth and Sun so that the Moon’s shadow falls on the Earth. Although solar eclipses are rarely seen at any given location on Earth, they can be observed somewhere on the Earth’s surface at least twice and as often as five times per year. Eclipses can be observed by most Earth-orbiting satellites that have wide fields of view. Therefore, scientists working with data sets derived from these satellite sensors should be aware of the reduced solar irradiance within the area of the Moon’s shadow.

This true-color Moderate-resolution Imaging Spectroradiometer (MODIS) image shows a composite of two adjacent viewing swaths acquired on December 25, 2000 in two consecutive overpasses. The scene covers an area from the Great Lakes in the north to Georgia toward the south. (The full scene covers from Northern Quebec to Florida). Notice that the swath on the left side of the image [acquired at 17:30 UTC (12:30 EST)] is considerably darker than the swath on the right [acquired at 15:50 UTC (10:50 EST)_eclips] due to the Moon’s shadow.

This eclipse was partial (there was no place on Earth where the Sun was completely hidden behind the Moon). The greatest eclipse occurred in Baffin Island, north of this image, with a maximum eclipse magnitude of 0.72 (72% of the Sun was screened by the Moon at that location). The Moon’s shadow (penumbra) extended as far as Nicaragua, much further south of this image. The penumbra covered an area of more than 12000 km diameter on Earth.