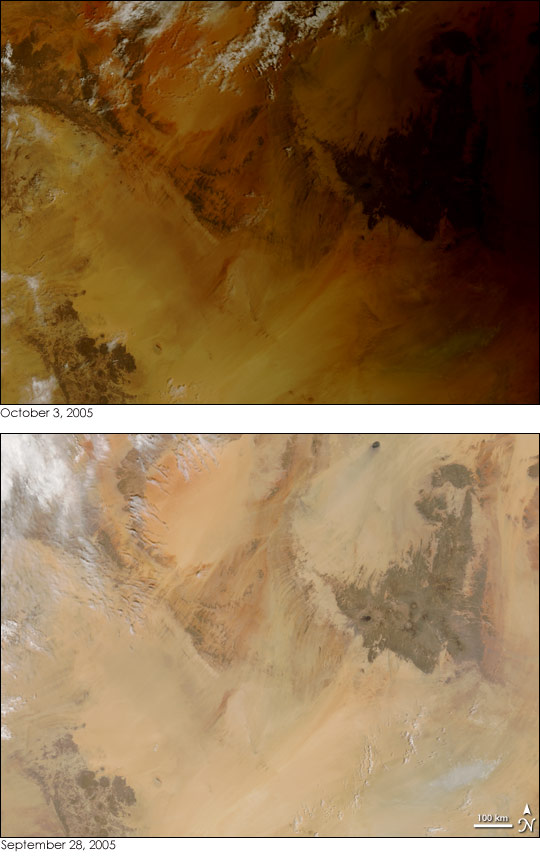 Twilight fell over Chad and Niger at mid-day during the annular solar eclipse on October 3, 2005. The normally pink and tan tones of the desert took on a deep orange hue in the dim light along the edge of the Moon’s shadow. The eclipse fell first over Spain and Portugal, and the Moon’s shadow traveled southeast across the globe as the eclipse progressed. At 11:05 a.m. local time, the shadow was just passing over the border between Chad and Niger when the Moderate Resolution Imaging Spectroradiometer (MODIS) on NASA’s Terra satellite captured the top image. The lower image was taken on September 28, 2005, and shows the region under normal light.

During an annual eclipse, the Sun is visible behind the black disk of the Moon like a fiery halo. In a total eclipse, the Moon blocks the Sun entirely. The difference between the two is caused by the Moon’s orbit around the Earth. The Moon’s orbit is not circular; it is elliptical, like a squashed circle with the Earth at its center. This means that the Moon is not always the same distance from the Earth. When it is close to the Earth, the Moon appears larger than when it is far away. During a total solar eclipse, the Moon is closer to the Earth and so is able to block out the Sun entirely. An annular eclipse occurs when the Moon is farther from the Earth, and so the Moon’s disk is not large enough to cover the Sun.

The large images provided above extend farther to the south and include Lake Chad. Both images are provided at the sensor’s maximum resolution of 250 meters per pixel. The October 3 image is available in additional resolutions from the MODIS Rapid Response Team.

The Moon cast its shadow over the Earth on October 3, 2005, leaving parts of Africa and Europe in darkness.