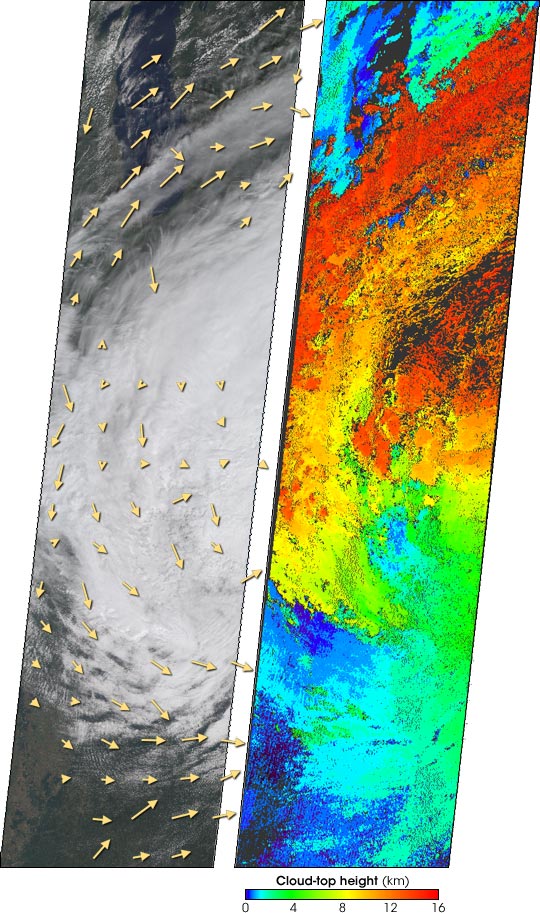 On Tuesday, August 30, 2005, the center of Tropical Storm Katrina still sprawled over the Tennessee valley. At the time, the storm had weakened significantly from the Category 4 hurricane status it had when it struck the Gulf Coast, and it was still weakening as it rained and blew over the region. NASA’s Multi-angle Imaging SpectroRadiometer (MISR) measured cloud-top heights and cloud-tracked wind velocities as the storm passed over the valley. Measurements such as these can help atmospheric scientists compare results of computer-generated hurricane simulations with observed conditions, ultimately allowing them to better represent and understand physical processes occurring in hurricanes.

Moving air is influenced by the rotation of the Earth, which causes the Coriolis force. The Coriolis force causes air rushing into the center of Northern Hemisphere hurricanes to have counterclockwise rotation. It is less widely known that at high altitudes, outward-spreading air rotates in the opposite direction: clockwise. This pair of images illustrates this phenomenon. The image on the left shows wind direction with arrows that are superimposed across the natural-color view from MISR’s nadir (vertical-viewing) camera. The image on the right shows cloud-top heights in shades from blue (lowest altitude) to red (highest altitude). Areas of no data are dark gray.

The Multi-angle Imaging SpectroRadiometer observes the daylit Earth continuously, viewing the entire globe between 82 degrees North and 82 degrees South latitude every nine days. This image covers an area of about 380 kilometers by 1970 kilometers. These data products were generated from a portion of the imagery acquired during Terra orbit 30324 and utilize data from blocks 55-68 within World Reference System-2 path 22. MISR was built and is managed by NASA’s Jet Propulsion Laboratory, Pasadena, CA, for NASA’s Science Mission Directorate, Washington, DC. The Terra satellite is managed by NASA’s Goddard Space Flight Center, Greenbelt, MD. JPL is managed for NASA by the California Institute of Technology.