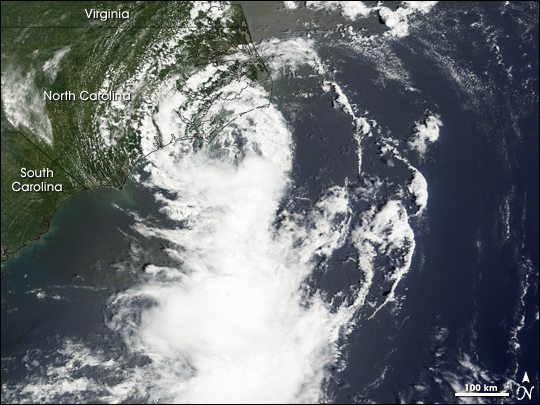 Tropical Storm Cristobal was the third named storm in the 2008 Atlantic storm season. Forming in the coastal waters off South Carolina, Cristobal brought rain, storm surge, and high winds to the Outer Banks of North Carolina on July 20, 2008. The center of the storm system never came ashore, and the heaviest winds and rains were reported to the east of the storm’s center, according to the National Hurricane Center.

This natural-color satellite image, obtained by the Moderate Resolution Imaging Spectroradiometer (MODIS) on NASA’s Terra satellite, shows Tropical Storm Cristobal as it appeared at 11:00 a.m. local time (16:00 UTC) on July 20, 2008. The storm system has a distinct round shape and a very open storm center just off the Atlantic coast of North Carolina. A large bank of clouds well off the coast and south of the storm’s center appears to have more tall cloud towers (thunderstorms) than the center of the storm does, matching reports that most of the storm activity was far off shore.

Some rain from Cristobal fell on the long-smoldering fire in Pocosin Lakes National Wildlife Refuge, which had been burning since it was sparked by lightning on June 1. After brushing the Outer Banks, Cristobal headed back out to open waters off the U.S. East Coast. As of July 22, the storm was not anticipated to make landfall in the United States, but was coming ashore in Novia Scotia, bringing heavy rain and storm surge to the Canadian Maritime provinces.