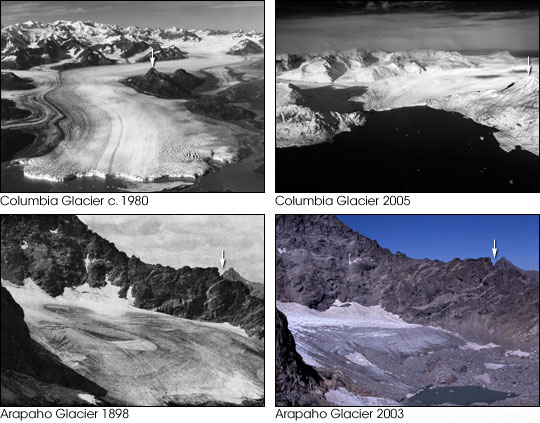 This square of images illustrates changes in glaciers that play very different roles in sea-level rise in recent decades. The top pair of images shows the retreat of Alaska’s Colombia Glacier between about 1980 (left) and in 2005 (right). The Columbia is a tidewater glacier—one that terminates in water—that contributes to sea-level rise mostly through iceberg calving. The bottom pair shows the retreat of the Arapaho Glacier in the Colorado Rocky Mountains between 1898 and 2003. The Arapaho is an alpine glacier that contributes to sea-level rise through melting. In the images above, white arrows show points of reference on the surrounding topography.

The Columbia Glacier flows down from the Chugach Mountains and into Prince William Sound about 40 miles west of Valdez, Alaska. Since the Columbia began retreating around 1980, the terminus—the ending edge—has retreated approximately 15 kilometers. Although the glacier is a big contributor to sea-level rise, its retreat is not directly tied to increased global temperatures and melting. Climate change may have given it a little initial nudge, but the processes that accelerated its disintegration were more physical than thermal.

All glaciers have a moraine—a pile of sediment, rocks, and other debris—at their terminus. Tidewater glaciers deposit this moraine underwater, on the sea floor. As the moraine builds up over time, the part of the glacier in the water is like a bridge stretched across a ravine. It is supported on one end by the shoreline and at the terminus by the underwater moraine. But in between, the glacier is stretched over deep water. Climate change or physical processes can cause the glacier terminus to retreat from the underwater moraine into the deeper water toward the coast. Iceberg calving can become extremely rapid once the terminus is buoyed by the deeper waters and is free of the drag along the ocean floor. This rapid calving contributes significantly to sea-level rise.

The retreat of mountain glaciers, on the other hand, is directly tied to increasing temperatures and melting. The Arapaho Glacier in the Rocky Mountains in Boulder County, Colorado, has shrunk dramatically since it was photographed in 1898. Measurements collected since 1960 suggest the glacier has thinned by at least 40 meters since then; thinning between 1898 and 1960 is unknown but is probably considerably greater than 40 meters. Compared to the contribution of tidewater glaciers, the volume of water added to the sea from melting alpine glaciers is very small.

To read more about glaciers, ice shelves, and ice sheets and how they respond to climate and physical processes, read the feature story Time on the Shelf.