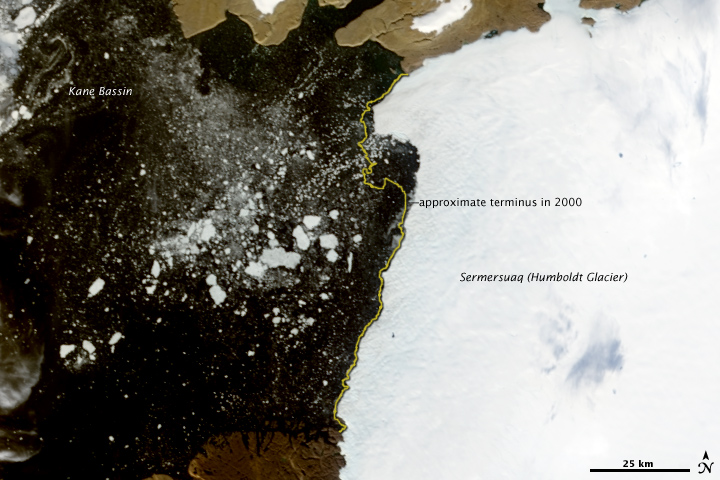 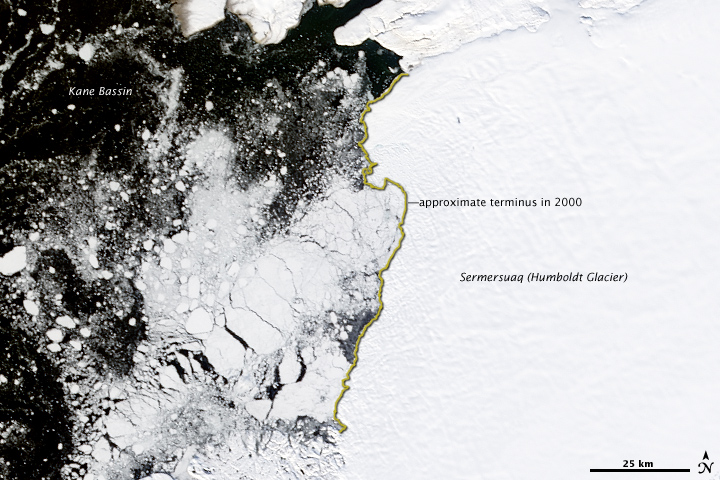 Stretching about 90 kilometers across Kane Bassin in the Nares Strait, northwestern Greenland’s Sermersuaq Glacier, also called Humboldt Glacier, is the Northern Hemisphere’s widest tidewater glacier—a glacier that begins on land, but terminates in water. The Sermersuaq is a major source of icebergs in the strait, which connects the Lincoln Sea in the north to Baffin Bay in the south.

This pair of images shows the retreat of the Sermersuaq Glacier between 2000 and 2008. In these natural-color images from the Moderate Resolution Imaging Spectroradiometer (MODIS) on NASA’s Terra satellite, the approximate terminus of the glacier on August 31, 2000 (bottom image), is traced with a yellow line on an image from August 30, 2008 (top). Although the southern part of the terminus showed little change during the period, significant retreat is visible in the northern part, where a fast-flowing ice stream is located. In both images, the deep blue waters of Kane Bassin are littered with ice, which may include icebergs and sea ice.

Having a “toe” in the water adds complexity to the natural cycle of advance and retreat that a glacier experiences in response to climate changes. The behavior of tidewater glaciers is affected not only by melting and snowfall on land, but also by the shape of the fjord or coastline where the glacier enters the water, the depth of the water, tides, and the thickness of the moraine (a shoal of sediment and rock) that builds up underwater at the tip of the glacier.

Even in the absence of human-caused climate change, tidewater glaciers naturally experience century-long cycles that include phases of rapid retreat. After decades of slow advance, the terminus of the glacier eventually becomes grounded on its own moraine. The shoal can become so thick that it stops icebergs from calving for extended spans of time. The support of the shoal allows the glacier to grow larger than it could if it were free-floating.

A small amount of thinning or retreat at the terminus can trigger a rapid retreat once the glacier—too large to float—is ungrounded from the shoal. The initial thinning or retreat of a tidewater glacier may result from a warming climate, but the extremely rapid retreat thereafter has as much to do with topography and the laws of physics as it does with the current climate.