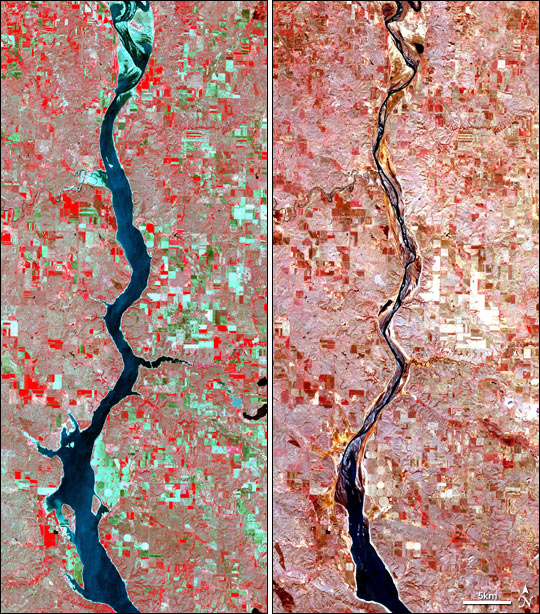 The Missouri River and its surrounding ecosystems are struggling in the tight fist of a 6-year drought. In North Dakota, 374-kilometer-long Lake Oahe, the nation’s fourth largest reservoir, is so low that it has left the state. The long, thin reservoir extends upriver from the Oahe Dam on the Missouri from Pierre, South Dakota, to Bismarck, North Dakota. North of the state line, more than 100 kilometers of the lake that were formerly about 8 kilometers wide have reverted to a narrow river. The shrinking of the lake has left behind weedy mudflats and boat ramps stranded 2 kilometers from the water’s edge.

These images of Lake Oahe show the reservoir on April 4, 2005, (right) compared to the level on May 18, 2000 (left). The Missouri runs through the center of the images in a dark blue line. The image on the left was captured by NASA’s Landsat 7 satellite, while the image on the right was captured by the Advanced Spaceborne Thermal Emission and Reflection Radiometer (ASTER) on NASA’s Terra satellite. In both images, vegetation appears in shades of red, while bare or sparsely vegetated ground are in shades of green (May 18 image) or tan (April 4 image). The already-thin reservoir has shrunk dramatically in the four years between the images. Both images cover an area of 28.7 by 65.6 kilometers, and they are centered along the North and South Dakota border.

The drought’s list of effects is long and painful: shortage of drinking and irrigation water; reduction in hydroelectric capacity; decrease in tourism; reduction in shipping; threats to endangered wildlife. The cause is the continuing yearly shortage of snowpack in the Rocky Mountains in Montana, where the Missouri River has its headwaters. 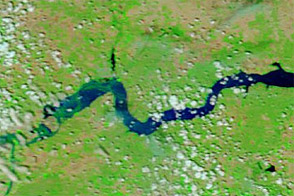