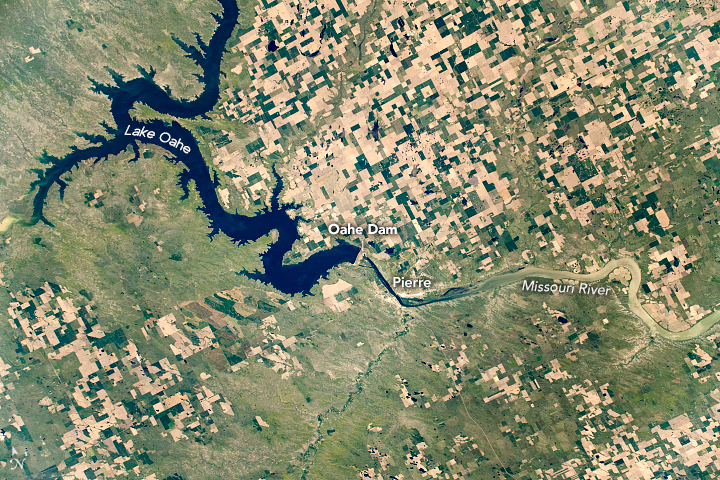 This photograph of Lake Oahe, South Dakota, was taken by an astronaut looking down from the International Space Station (ISS). The lake stands behind the Oahe Dam, and the Missouri River flows downstream to the southeast. The extensive rectangular fields around the river and lake are a visual reminder that agriculture is the main economic engine of the state.

Lake Oahe is the fourth largest man-made reservoir in North America, extending from Pierre, South Dakota, to Bismarck, North Dakota (a distance of approximately 230 miles/370 kilometers). Since the lake is a storage reservoir, the water volume changes frequently, especially during droughts. Lake Oahe is used for many purposes, including irrigation, hydroelectric power generation, and recreation.

The dam and lake is one of several reservoir systems built on the Missouri River. The main stem Missouri is the longest river in North America, flowing from the Rocky Mountains in Montana to its confluence with the Mississippi River near St. Louis. Along its length, the river feeds reservoirs in Montana, North Dakota, South Dakota, and along the Nebraska-South Dakota border.

Astronaut photograph ISS060-E-553 was acquired on June 25, 2019, with a Nikon D5 digital camera using a 116 millimeter lens and is provided by the ISS Crew Earth Observations Facility and the Earth Science and Remote Sensing Unit, Johnson Space Center. The image was taken by a member of the Expedition 60 crew. The image has been cropped and enhanced to improve contrast, and lens artifacts have been removed. The International Space Station Program supports the laboratory as part of the ISS National Lab to help astronauts take pictures of Earth that will be of the greatest value to scientists and the public, and to make those images freely available on the Internet. Additional images taken by astronauts and cosmonauts can be viewed at the NASA/JSC Gateway to Astronaut Photography of Earth. Caption by Laura Phoebus, Jacobs Technology, JETS Contract at NASA-JSC. 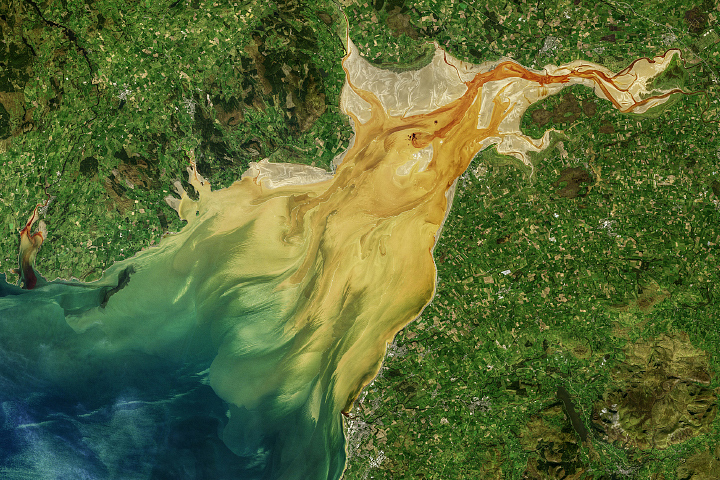