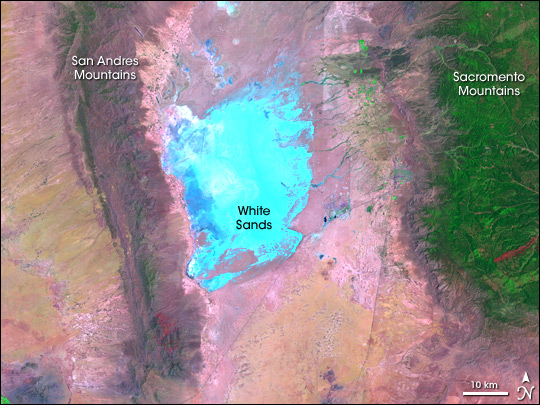 Between the San Andres and Sacramento Mountains in southern New Mexico lies the Tularosa Valley, the southern end of the Rio Grande Rift. The Rio Grande Rift is a desert-dotted basin that extends northward all the way into Colorado, where it harbors the Great Sand Dunes National Monument. The Tularosa part of the rift valley is home to White Sands National Monument, the largest gypsum dune field in the world.

Gypsum is a common mineral found in sedimentary rocks (rocks formed from layer upon layer of sediment laid down by wind or water). Known to chemists as “hydrated calcium sulfate,” gypsum erodes from rock outcroppings on the surrounding mountain ranges and ends up in the basin below, forming towering, wave-like dunes of the pearly, glistening crystals. In this infrared-enhanced image from NASA’s Landsat satellite on June 13, 2001, the dunes appear brilliant blue. The area of darker blue between the White Sands dune field and the San Andres Mountains is known as Alkali Flats.

Areas of low vegetation or bare rock appear pink in the image, while vegetation is bright green, such as the forests of the Sacramento Mountains. Other types of dunes are found in the Tularosa Valley. To the south of White Sands and to the west over the San Andres Mountains are yellow-tinged areas of quartz-based sand dunes. These dunes are called coppice dunes, which are soft-sided dunes loosely anchored by some amount of vegetation.