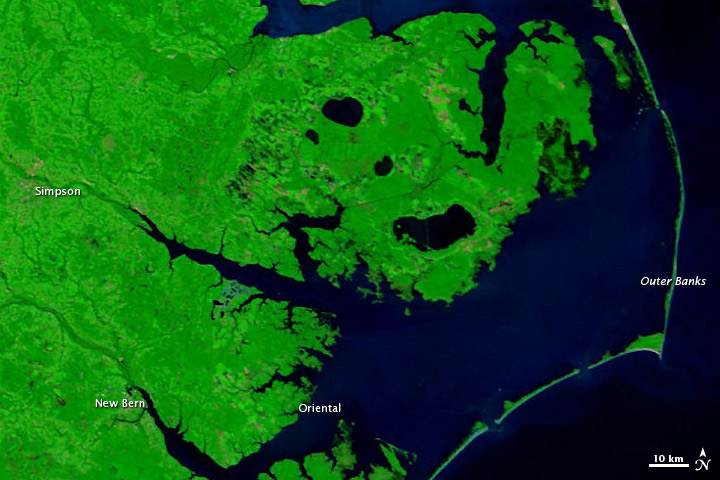 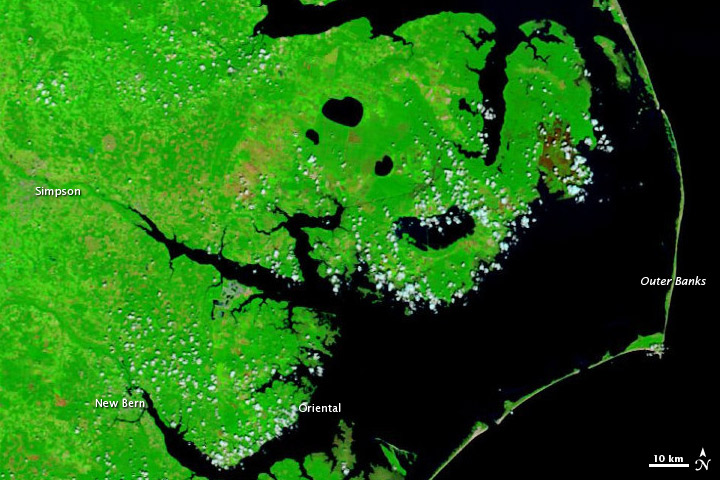 The Moderate Resolution Imaging Spectroradiometer (MODIS) on NASA’s Terra satellite captured these images on August 28, 2011 (top), and August 16, 2011 (bottom). These images use a combination of visible and infrared light to better distinguish between water and land. Water is navy blue. Vegetation is green, and bare ground, including burn scars, is earth-toned. Clouds are pale blue-green.

The biggest difference between these images is the amount of standing water apparent on August 28, especially east and northeast of Simpson. Twelve days earlier, these areas had been dry. Trees can easily hide standing water from the satellite sensor’s view, so flooding shows up best in areas where the forest has burned or been cleared. Flooding may be more extensive than this image shows.

A close look at these images reveals another difference along the Outer Banks. Tan-colored sandy areas, particularly east of Oriental, can be discerned on August 16. On August 28, those areas are blue, indicating that the sand is either saturated or flooded.

According to the News Observer, floods stranded dozens of families near the town of Oriental, and severe flooding occurred around the city of New Bern. Serious flooding also struck parts of the Outer Banks. The Weather Channel reported that Highway 12 had been compromised in several places.

The Advanced Hydrological Prediction Service (AHPS) of the U.S. National Weather Service reported flooding along the Chicod Creek near Simpson, as well as varying degrees of flooding in other locations. The North Carolina state health director warned residents that water in public systems and wells might be unsafe to drink, and multiple public water systems issued boil advisories.

Acquired August 28, 2011, and August 16, 2011, these false-color images compare conditions in North Carolina before and after Hurricane Irene flooded parts of the state. 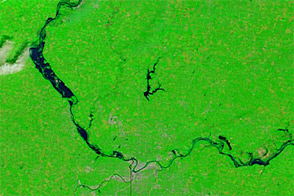 Acquired July 10, 2011, and July 14, 2010, these false-color images compare conditions along the Missouri River in Kansas and Missouri. The Missouri was flooded in the summer of 2011.