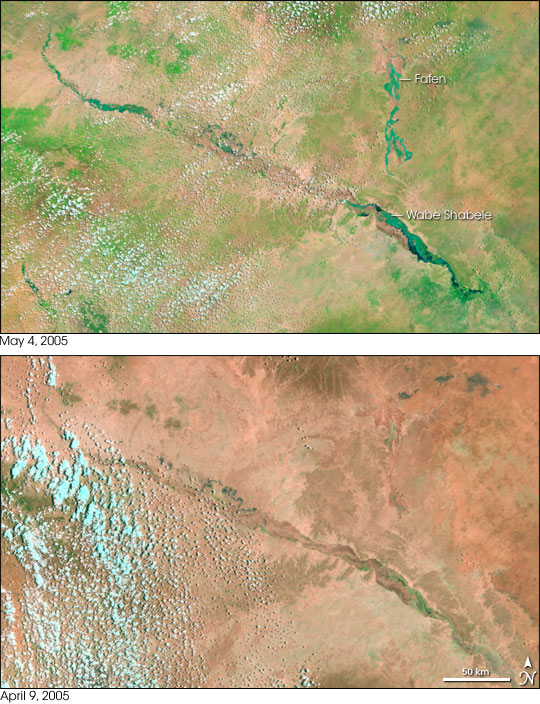 As of May 5, 2005, 154 people have been reported dead in the wake of severe flooding along the Wabe Shebele in southeastern Ethiopia. The United Nations Office for the Coordination of Humanitarian Affairs reports that at least 100,000 people have been affected by the flooding.

The floods started on April 23 when the Wabe Shebele burst its banks. Ongoing rain has prolonged the flooding. On May 4, skies were clear when the Moderate Resolution Imaging Spectroradiometer (MODIS) flew overhead on NASA’s Terra satellite to capture the top image. The Wabe Shebele and the Fafen River to its north are both fat with flood water compared to their extent on April 9, 2005, lower image. Both images are shown in false color to reveal the extent of flooding. Water is blue and blue-green, vegetation is bright green, bare ground is pinkish tan, and clouds are light blue.

In addition to flooding 160 villages, the swollen river has also extended the reach of crocodiles and water snakes. The UN reports that 19 of the deaths were caused by crocodiles. The floods have also brought diseases, like malaria and diarrhea, to the region.