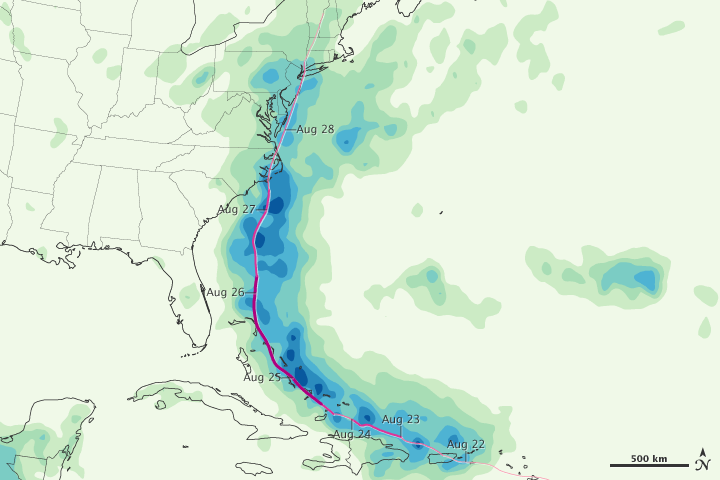 Although hurricanes often call to mind raging winds and toppling trees, some of the worst destruction caused by these storms comes in the form of rain. Hurricane Irene, which roared up the U.S. East Coast in late August 2011, was no exception. Flooding was reported from North Carolina’s Outer Banks to New England.

This color-coded image shows rainfall totals from August 22 to August 28, 2011. The heaviest rainfall—more than 240 millimeters or over 9 inches—appears in dark blue. The lightest rainfall—less than 40 millimeters or 1.5 inches—appears in light green. Superimposed on the rainfall totals is a storm track, with maroon indicating the strongest storm intensity, and pink indicating the weakest.

Heavy rain occurs all along the storm track, and much of the heaviest rain falls over the ocean. On land, however, Hurricane Irene brought rain heavy enough to cause destructive floods.

At 8:00 a.m. Eastern Daylight Time on August 27, the U.S. National Hurricane Center (NHC) reported that the center of Irene made landfall near Cape Lookout, North Carolina. Nearby towns soon reported several feet of water on their roads, The New York Times said.

Although related, rainfall amounts and floods do not correspond exactly. How much flooding a certain amount of rainfall causes depends on many factors, such as vegetation, topography, soil type and land use, and previous weather patterns that may have saturated the soil. This may explain why more serious flooding was reported in the Northeast than in other areas receiving similar amounts of rain. According to news reports, authorities expressed particular concern about flooding in Vermont.

On August 29, CNN reported that Irene was responsible for at least 24 deaths in nine states, and damage could total $7 billion, according to an analysis firm specializing in such estimates. Although significant, the damage could have been worse and was a fraction of the damage caused by Hurricane Katrina exactly six years earlier. Despite the destruction caused by the storm, much of the East Coast was returning to normal.

Besides the storm track and rainfall associated with Irene, this image shows a pocket of relatively heavy precipitation over the Atlantic Ocean (image right), which could be associated with Tropical Storm Jose.

This image is an estimate of the rainfall recorded over a very large area when the satellites are overhead. The estimate may miss pockets of heavy rain in smaller areas or short periods of more or less intense rain. This means that local rainfall totals, measured from the ground, may be different from the estimate shown here. Satellite-based estimates provide a useful overview of broad rainfall patterns that, combined with ground measurements, provide a more complete picture of the storm.