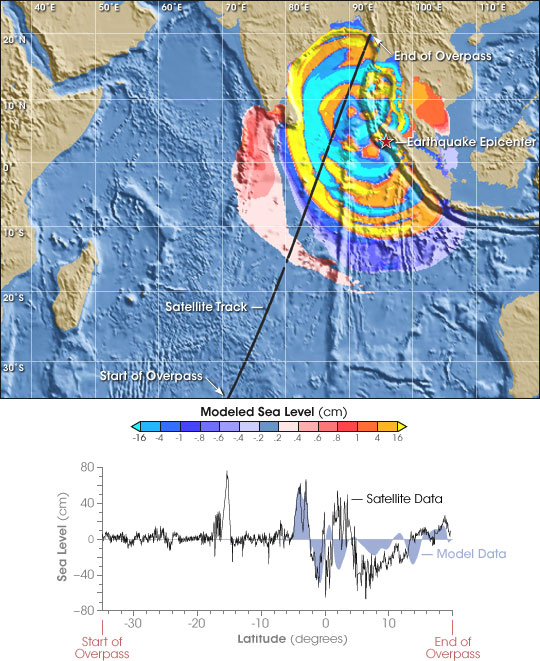 Set into orbit to record the shape of the ocean’s surface, Jason-1 and TOPEX/Poseidon satellites are helping scientists understand the dynamics of the deadly tsunami that devastated countries around the Indian Ocean on December 26, 2004. Radar altimeters aboard the satellites recorded the height of the wave as it traveled across the open ocean. By comparing the sea height measurements taken on December 26 with measurements taken earlier, scientists from NASA’s Jet Propulsion Laboratory, the National Atmospheric and Oceanic Administration (NOAA), and the French Space Agency (CNES) were able to measure the crests and troughs of the tsunami as it moved through the Indian Ocean.

Though the data were not broadcast quickly enough to provide an early warning, they are helping NOAA scientists refine computer models that forecast the effects of tsunamis, and that can improve future early warning systems. The map above shows the Jason-1 satellite track superimposed on computer model data of the tsunami height two hours after the earthquake (top). The graph displays satellite data compared with model calculations along the satellite track (above, lower). At about 60 centimeters (24 inches) in height, the initial wave is similar in both the satellite data and computer model. Subsequent wave peaks are not as accurate.

The satellite data allow scientists to check the accuracy of the models, which are based on seismic and bathymetric data. The satellite data acquired on December 26 are of particular value because they come from the center of the ocean far from coastal tide gauges and other instruments that measure wave heights. By showing scientists where the models failed, the data will improve future models. More accurate models can show how tsunamis develop, travel, and impact the shoreline so that vulnerable areas can prepare for future events.

Sent into orbit to record the shape of the ocean’s surface, two satellites helped scientists understand a deadly tsunami in the Indian Ocean.