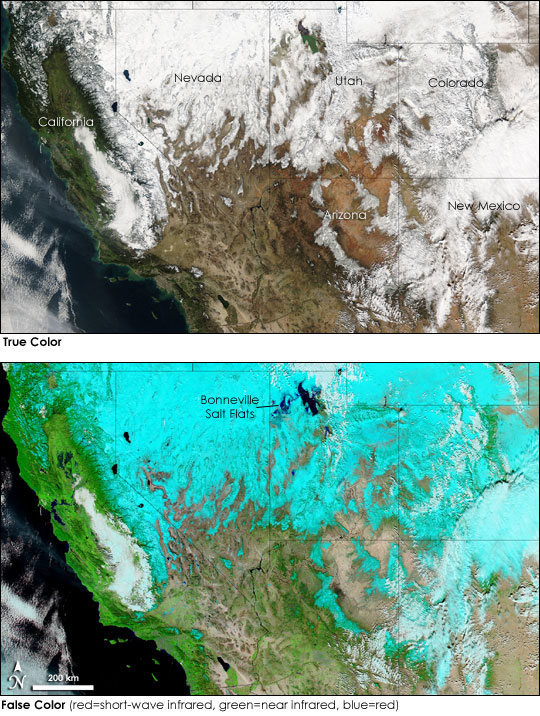 Heavy snow covered most of the western United States on January 12, 2005, when the Moderate Resolution Imaging Spectroradiometer (MODIS) on NASA's Aqua satellite captured this image. Much of the snow has fallen in a series of storms that started at the end of December. Between December 27 and January 3, 12 to 14 feet (3.7 to 4.3 meters) of snow fell on the Sierra Nevada around Lake Tahoe, and additional snow has fallen since that time. Heavy snow has also fallen on the mountains of Nevada, Utah, and Arizona. As this image shows, the snow is not confined to the mountains. The valleys are also draped in white. Tucked between two mountain ranges, Cache Valley in northern Utah received up to 20 inches (0.51 m) of snow between January 8 and January 12--enough snow to cause trees and power lines to topple and roofs to bow.

Not all of the white seen in the true-color image (top) can be attributed to snow. Clouds also cover parts of the region. The false-color image helps distinguish between cloud and snow. Created using visible and infrared wavelengths of energy, the image shows snow and ice as a turquoise blue and warmer water clouds as white. High ice clouds, such as those covering southwestern Colorado, are also turquoise. Vegetation is bright green, and water is dark blue and black.

Because water stands out more clearly in the false-color image, floods are also visible. In this image, water has accumulated on the Bonneville Salt Flats west of the Great Salt Lake in northern Utah. Formerly part of a massive lake bed, the Salt Flats consist of a broad, flat plain that is crusted with a deposit of salty minerals and devoid of vegetation. Winter precipitation typically covers the plain with a light layer of water that evaporates in the spring and summer.

The ground is bare in the southwest, where the precipitation has fallen as rain. Devastating floods have raged along the rivers of southwestern Utah, northwestern Arizona, and southeastern Nevada, destroying bridges, roads, and homes. In southern California, the rain has triggered widespread floods and a deadly mudslide. Destructive though the floods may be, they are not clearly visible in this image.

Despite the problems the storms have caused, the snowfall is a boon to the parched west, where a prolonged drought has drained reservoirs over the past four years. In the western United States, as in many semi-arid regions, the water supply depends on snow melt flowing down from the mountains during the summer. Currently, the snowpack water content (the amount of water stored in mountain snow) is 150 percent of normal in much of the Southwest, reports a scientist from the National Oceanic and Atmospheric Administration (NOAA) Climate Prediction Center. The snow could start to relieve the drought as long as a warm spring does not melt the snow too early.

A string of storms that started on December 27, has lashed the western United States with heavy snow and rain. When the clouds cleared on January 12, much of the West was covered with white.