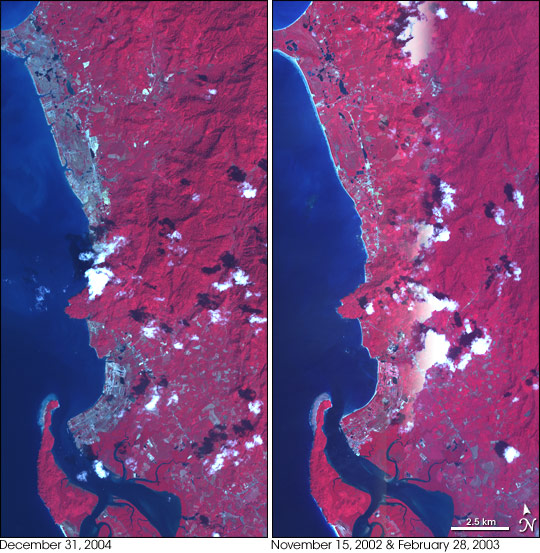 Nearly three weeks after an earthquake triggered the deadly Indian Ocean tsunami on December 26, 2004, satellite analysis continues to illustrate the magnitude of the disaster. This pair of ASTER images contrasts before and after views of a portion of the western coastline of Thailand in the Phang-Nga province, about 50 kilometers north of the island of Phuket. In these images, vegetation is dark red, while bare earth is grey. On December 31, five days after the waves swept ashore, large sections of the shoreline are grey, stripped of vegetation or covered in mud and sand. Water has broken through several places along the northern beach. Tiny fingers of blue water slice into the land where no inlet existed in the image on the right.

Like Phuket, this region of coastline is a tourist mecca, and beachfront on the Andaman Sea (left edge of both images) is dotted with golf courses, resorts, and other tourist-centered development, as well as national marine and terrestrial parks, including the Khao Lak-lam Ru National Park. Most of the land in the park is found in the mountainous region away from the shore, just to the south of the center of the images. However, the park’s terrain also includes the forest-covered cape that extends westward into the Andaman Sea.

The image acquired before the tsunami is actually a composite of two separate ASTER images. The left third of the image was acquired on November 15, 2002, while the right two-thirds of the image was taken on February 28, 2003. Neither scene covered the same area as the December 31 image, but by combining the two, a comparison image can be made.

The comparison shows an interesting pattern of damage along the coast. It is the long, smoothly curving beaches that have been devastated by the tsunami, not the land that juts into the ocean. Several factors probably contributed to this pattern. First, elevation is certainly a factor. The headland in the center of the image is probably a high rocky point that would not be easily inundated by a large wave. The wrinkle of inland mountains appears to curve out to the coast between the two damaged beaches. The beaches, on the other hand, probably have a low elevation that gently slopes toward the ocean, allowing any water that comes ashore to sweep further inland.

Second, the headland itself may have contributed to the damage on its flanks. Waves approaching the point would tend to be diffracted, or broken up, sending additional energy into the beaches on either side of the point. This would amplify the waves along the beaches. By the same principle, the concave shape of the beach to the south focuses wave energy and wave run-up.

Another contributing factor to the pattern of damage seen here is ocean bathymetry, the shape and depth of the ocean floor. Tsunami height and run-out (the horizontal distance the wave travels) are larger where the ocean floor has a gentle slope. Rocky coastlines that drop into deep ocean are not as affected.

Finally, vegetation patterns may have altered the type of damage the wave created when it came ashore. The forested cape appears to be untouched, possibly because the trees served as a break. The developed beach land probably had less dense vegetation to cushion the wave’s impact.