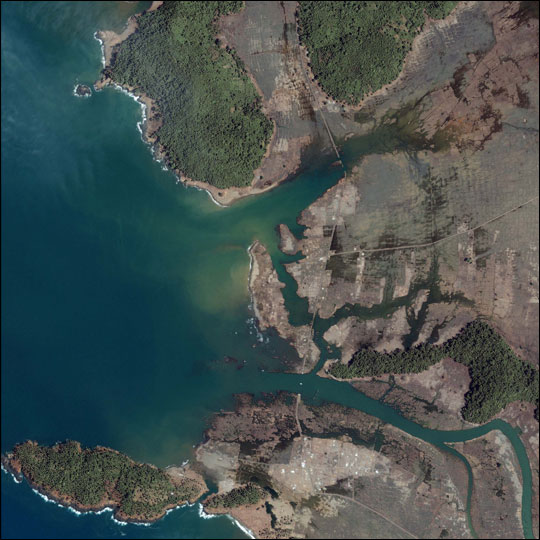 This series of images shows tsunami damage in the Aceh Province of northern Sumatra. Located immediately west of the epicenter of the earthquake that triggered the tsunami, this region was both the first to be impacted by the massive wave and the most severely damaged. The images show sections of the western shoreline of Aceh, between Banda Aceh in the north and Meulaboh in the south. The images were taken by the Ikonos satellite on January 18, 2005, a little over 3 weeks after the tsunami hit.

Like the above image, many of the images show the effect of elevation on the battered shore. The low-lying valleys cut by streams that drain into the Indian Ocean have been entirely stripped of vegetation, whereas islands of trees reveal higher ground. The trees themselves may have prevented some damage. Notice the grid-like pattern in the bare earth in the center of the image. This suggests that the land may have been cleared and divided, possibly for agriculture. Without trees to buffer the wave and anchor soil, the water traveled far inland, leaving a track of mud and destruction.

The shape of the shoreline may have also contributed to the pattern of damage seen in this image. Concave beaches tend to focus wave energy, which results in larger waves breaking on the shore. The points of land that jut into the ocean on either side of the beach diffuse waves. This, combined with their higher elevation and tree cover, may have helped to minimize the damage.

The images also reveal why it has been so difficult for aid to reach the people who live along Aceh’s northwest coast. The coastal road that connects the villages has been covered with sand and other debris in several places in the above image. In the bottom center of the image where the road crosses an inlet, a white point—the support—is all that remains of the bridge. Similar road damage can be seen in most of the images in this series.