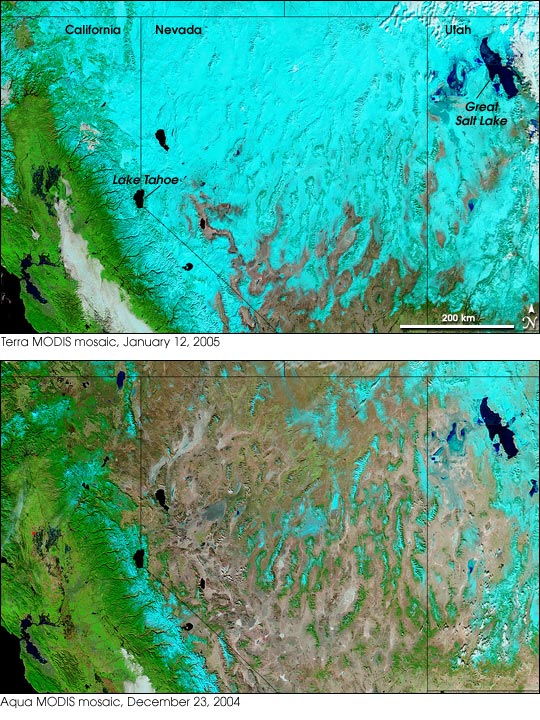 Between late December 2004 and mid-January 2005, many places in the U.S. West received snowfall daily. The area around Lake Tahoe in the Sierra Nevada Mountains, for example, received snow every day from December 24 through January 11, and had accumulations around 19 feet. The rapid accumulation of such large amounts of snow increases avalanche risk, and land managers at ski resorts and state and national parks have been busy assessing snow pack stability and setting off explosives at avalanche- prone locations to release snow and to test the stability of the snow layers.

In addition to the widespread blanket of snow stretching all the way across the January 12 image, a few areas of standing water appear more clearly than in the December image. Water on the ground increased in the northern end of the California Central Valley, as well as in the salt pans to the west-southwest of the Great Salt Lake.

The high-resolution image provided above is the January 12 image at a spatial resolution of 500 meters per pixel. The MODIS Rapid Response System provides both images at additional resolutions and color combinations: January 12, 2005, and December 23, 2004.

A string of storms that started on December 27, has lashed the western United States with heavy snow and rain. When the clouds cleared on January 12, much of the West was covered with white.