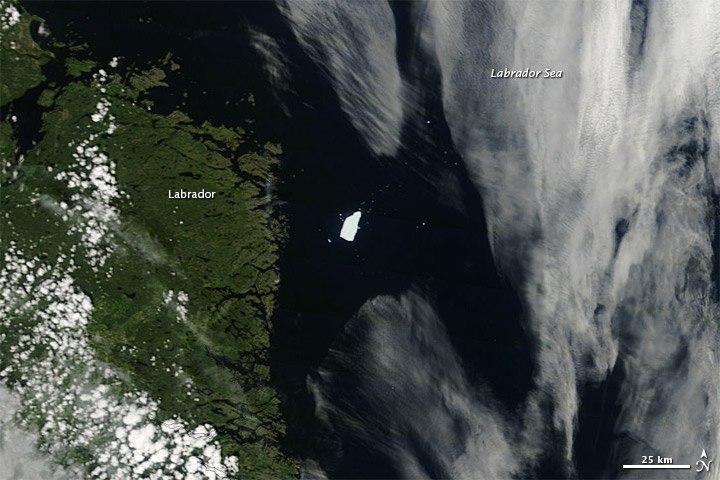 In August 2010, the Petermann Glacier along the northwestern coast of Greenland calved an ice island roughly four times the size of Manhattan. Nearly a year later, on July 20, 2011, a piece of that ice island—named Petermann Ice Island-A (PII-A) and about the same size as Manhattan—was still visible to the Moderate Resolution Imaging Spectroradiometer (MODIS) on NASA’s Terra satellite.

The Canadian Ice Service (CIS) tracked the ice island as it drifted through the Labrador Sea. On July 8, 2011, the CIS reported that the PII-A was approximately 55 square kilometers (21 square miles), and was continuing to lose surface area through calving and melting. On July 20, MODIS observed PII-A slightly south of where it had been a month earlier.

On July 21, 2011, MSNBC reported that PII-A was slowly drifting toward Newfoundland. The glacier was not likely to reach land; its base would probably become grounded on the sea floor off the coast. The ice chunk did, however, pose a potential hazard for shipping lanes and offshore oil rigs.