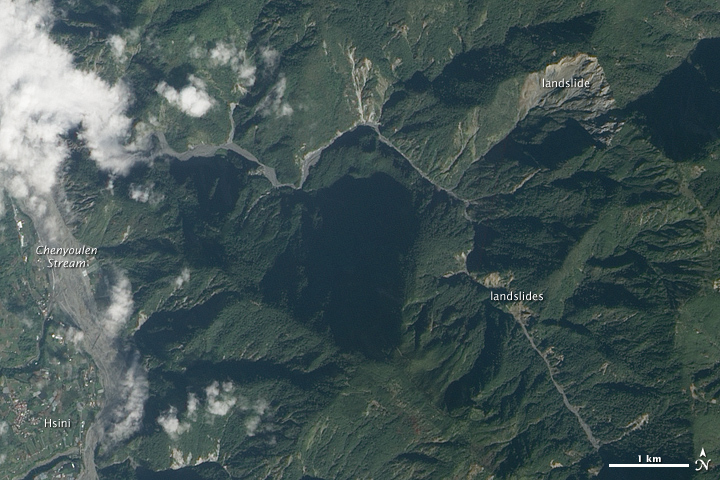 Taiwan is a mountainous, seismically active island. In fact, mountains account for about one-third of Taiwan’s land area, with a range stretching in a rough north-south line down the center of the island. Those mountains comprise the island’s main watershed, and water is plentiful thanks to ocean currents and breezes that deliver warm, moist air, periodic monsoon rains, and several typhoons each year.

The rugged topography and abundant water make for well-vegetated mountains, but this combination also leads to landslides. On December 17, 2010, the Advanced Land Imager (ALI) on NASA’s Earth Observing-1 (EO-1) captured this natural-color image of landslide-scarred mountains in central Taiwan.

As a professor of geography at Durham University (U.K.), David Petley has tracked numerous landslides in Taiwan, including a large one that struck northern Taiwan in April 2010 (beyond the area shown above). Petley notes that typhoons frequently ravage the region and cause flash floods and landslides. Typhoon Morakot and Typhoon Megi are two recent examples.

“The passage of typhoons past or across Taiwan often leads to the generation of exceptionally high rainfall totals,“ he notes. ”When combined with the steep topography and weak rocks, the rain inevitably triggers extensive landsliding.” Some landslide mitigation methods include mountain braces, such as those employed in Chiayi County.

A bull’s eye of heavy rain from Typhoon Morakot engulfs southern Taiwan in this rainfall accumulation image spanning August 3 to 9, 2009.