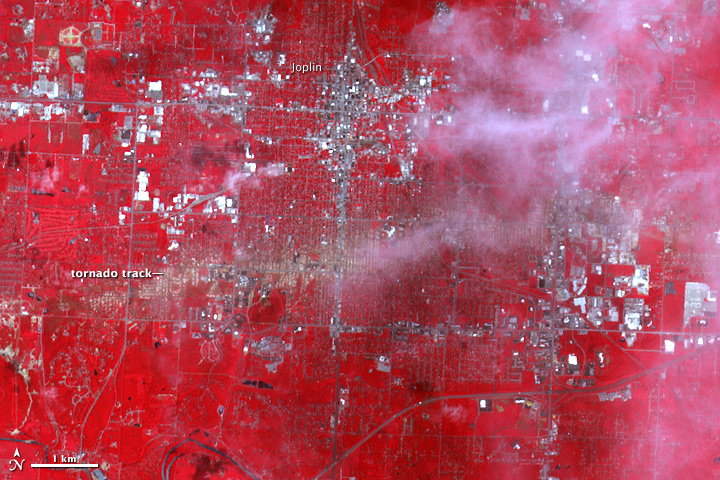 In the afternoon and evening of May 22, 2011, a supercell thunderstorm traveled from southeastern Kansas into southwestern Missouri. Over Joplin, Missouri, the supercell spawned an EF-5 tornado with winds higher than 200 miles (300 kilometers) per hour. As of May 28, 2011, the National Weather Service estimated the fatalities from the Joplin tornado at 142, and the number of injured at more than 750.

The track left by the Joplin tornado remained visible on May 30, 2011, when the Advanced Spaceborne Thermal Emission and Reflection Radiometer (ASTER) on NASA’s Terra satellite captured this false-color image. In this image, vegetation is red, buildings and paved surfaces are varying shades of gray, and clouds are nearly white. The tornado track is light brown.

As of May 30, the National Weather Service classified the Joplin tornado as the deadliest in the United States since modern recordkeeping began in 1950, and the eighth-deadliest tornado in U.S. history. Besides the human toll, the tornado caused widespread destruction to the city’s homes, commercial structures, public buildings, and roads. On May 31, 2011, the Springfield News-Leader reported that St. John’s Hospital in Joplin was so badly damaged that it would need to be completely replaced.