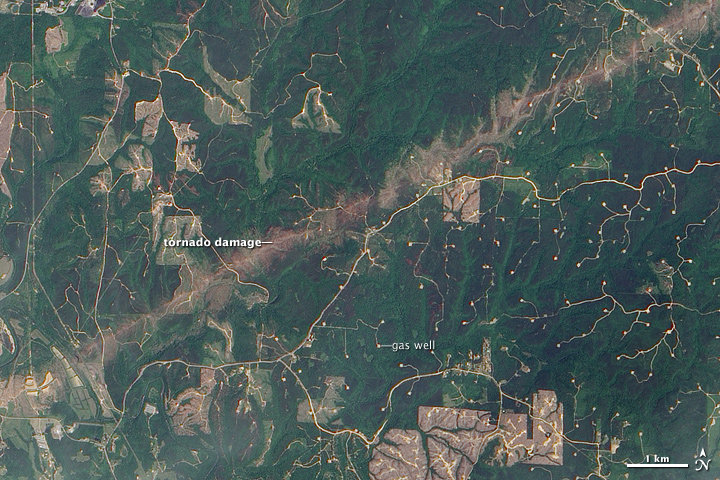 One of the many deadly tornadoes that struck the U.S. Southeast in late April 2011 was the Cordova tornado that cut a southwest-northeast track through Alabama. Lasting longer than two hours, the tornado formed on the afternoon of April 27, 2011. It left a path of damage 123 miles (198 kilometers) long and 0.75 miles (1.2 kilometers) wide in places, the U.S. National Weather Service reported. Rated as an EF-4, the Cordova tornado had estimated maximum winds of about 170 miles (275 kilometers) per hour.

On May 7, 2011, the Advanced Land Imager (ALI) on NASA’s Earth Observing-1 (EO-1) satellite captured this natural-color image of part of the Cordova track. The portion of the track shown here extends from northern Tuscaloosa County across the easternmost tip of Fayette County, and into Walker County. (The town of Berry, Alabama, lies to the north.)

Gas wells dot the mostly green landscape, but the tornado track is a long gash of brown. The Cordova tornado apparently stripped away vegetation.

As of May 10, 2011, the Cordova tornado was known to have caused dozens of injuries and 10 fatalities. Damage ranged from downed trees and tossed grain feed bins to destroyed homes.