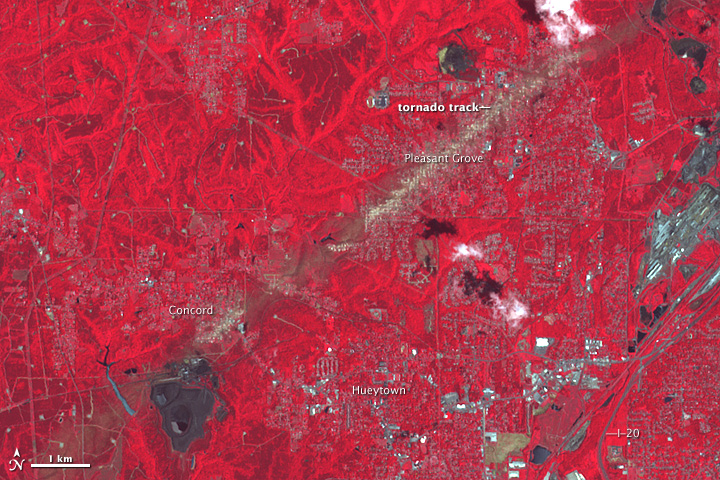 The tornado damage inflicted on Tuscaloosa on April 27, 2011, was just one part of a tornado track roughly 80.3 miles (129.2 kilometers) long and up to 1.5 miles (2.4 kilometers) wide. On May 4, 2011, the Advanced Spaceborne Thermal Emission and Reflection Radiometer (ASTER) on NASA’s Terra satellite observed another segment of the tornado track, closer to Birmingham, Alabama.

ASTER combines infrared, red, and green wavelengths of light to make false-color images that distinguish between water and land. Water is blue. Buildings and paved surfaces are blue-gray. Vegetation is red. The tornado track appears as a beige stripe running diagonally through this image.

On May 5, the National Oceanic and Atmospheric Administration (NOAA) National Weather Service issued updated information on the violent storms in the Birmingham area. Along the length of its 80-mile path, the tornado that passed through Tuscaloosa and Birmingham caused more than 1,000 injuries and at least 65 deaths. With winds of 190 miles (310 kilometers per hour), the tornado resulted from a supercell thunderstorm that lasted almost seven and a half hours, and traveled from Mississippi to North Carolina, spawning several violent tornadoes.

Between 7:00 a.m. CDT on April 25 and 7:00 a.m. on April 28, a total of 305 tornadoes struck the southeastern and central United States, according to NOAA’s updated survey released May 4. The high-resolution version of this image shows two more tornado tracks, one to the north and one to the south, both running parallel to the tornado track through Tuscaloosa and Birmingham.