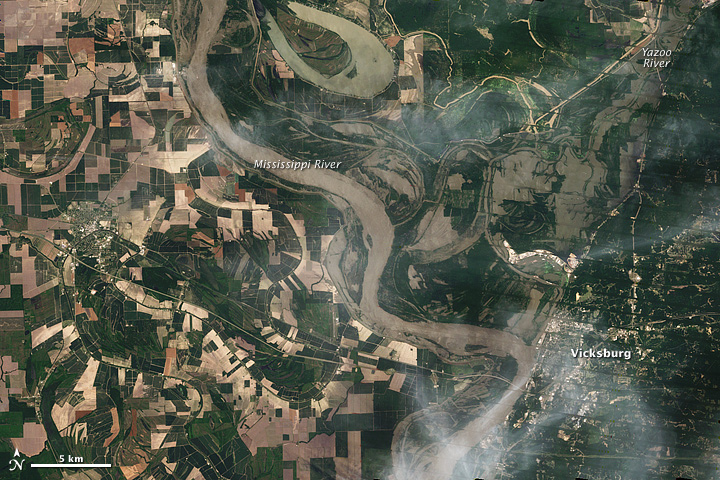 The Mississippi River set a new record at Vicksburg in May 2011, while the Yazoo River simultaneously flooded.

The Advanced Hydrological Prediction Service (AHPS) of the U.S. National Weather Service reported river levels in Vicksburg, Mississippi, at 57.1 feet (17.4 meters) overnight May 18–19. The previous record was 56.2 feet (17.1 meters), set in the Great Flood of 1927. As of 1:00 p.m. Central Daylight Time on May 19, the Mississippi River was projected to remain at roughly the same level through May 23.

Although below its record level, the Yazoo River at Yazoo City was also flooded, reaching 38.3 feet (11.7 meters) on May 19, the AHPS reported. That river was expected to continue rising until about May 22, although it was not projected to reach major flood stage or its historical record of 43.4 feet (13.2 meters) set in 1927.

The Enhanced Thematic Mapper Plus on the Landsat 7 satellite captured this natural-color image on May 18, 2011. Muddy water sits on some agricultural fields west of the Mississippi River. East of the river, in the vicinity of the Yazoo, flooding appears even more extensive. Thin white clouds hover over some of the area, and diagonal lines in the right half of the image are artifacts of the satellite sensor.

Despite the flooding, the U.S. National Park Service stated that the Vicksburg National Military Park was not affected and remained open on May 19, 2011.