High Waters along the Mississippi River 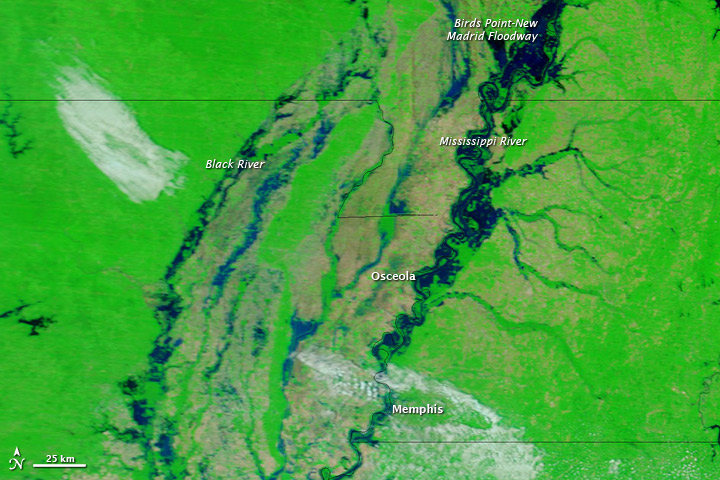 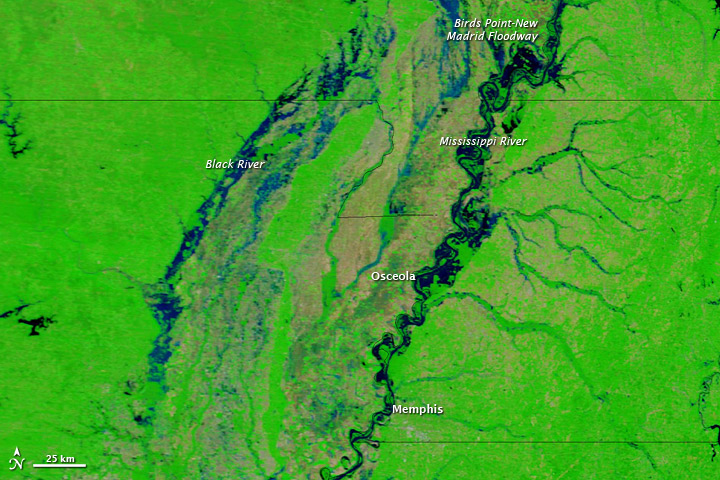 Water continued rising along the Mississippi River on May 8, 2011. On that day, the Advanced Hydrological Prediction Service (AHPS) reported that the Mississippi’s water level had reached 47.46 feet (14.47 meters) at 3:00 p.m. CDT in Osceola, Arkansas, and 47.55 feet (14.49 meters) at 2:00 p.m. in Memphis, Tennessee. The AHPS further relayed a civil emergency message at the request of some local officials. “All Shelby [County] residents should wrap up precautionary actions over the next couple of days and be prepared to evacuate. . . . The mayor of Memphis added, ‘We want to reassure our citizens that disaster teams are in place and will be doing everything possible to keep everyone safe.’”

The Moderate Resolution Imaging Spectroradiometer (MODIS) on NASA’s Terra satellite acquired these images on May 8, 2011 (top) and April 29, 2011 (bottom). Both images use a combination of infrared and visible light to increase the contrast between water and land. Water varies in color from electric blue to navy. Clouds (visible in the May 8 image) are white. Vegetation is green, and soil is brown.

Both images show flood conditions, but the flooding is more severe on May 8. In addition to higher levels north and south of Osceola, the inundation of the Birds Point-New Madrid Floodway, in the wake of a levee breach, is apparent in the north.

Acquired May 8, 2011, and April 29, 2011, these false-color images show rising water levels along the Mississippi River.

Rising Waters on the Lower Mississippi