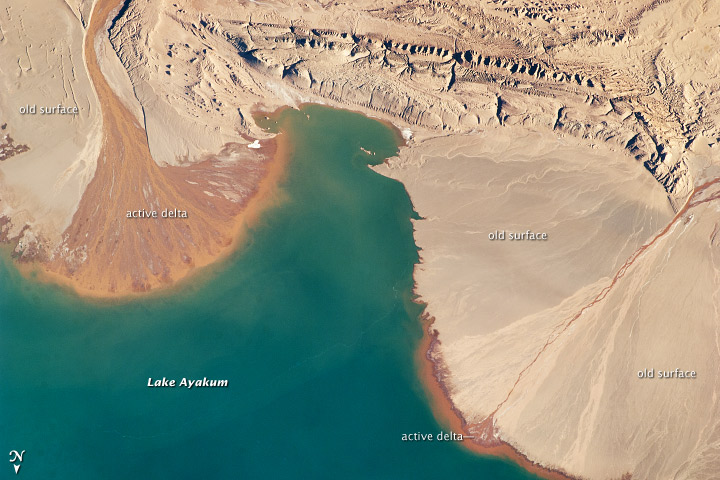 Numerous lakes dot the otherwise arid landscape of the Tibetan Plateau. One of those lakes is Ayakum, near the northern boundary of the Plateau, to the southeast of the Kunlun Mountains.

While many of the small glacier- and snowmelt-fed streams on the Plateau give rise to major Southeast Asian rivers (including the Mekong and Yangtze), some empty into saline lakes such as Lake Ayakum. This astronaut photograph highlights two river deltas formed along its southwestern shoreline.

When sediments build up to the point that a river can no longer flow over them, the river will jump to a new channel and begin the process anew. Over geologic time, the channels tend to sweep back and forth—similar to the motion of a windshield wiper—to form the semi-circular or fan shape typical of a delta.

Gray to tan surfaces indicate prior positions of the river channels; the uniform coloration and smooth texture suggest that they are relatively old and now inactive. By contrast, the younger and currently active delta surfaces have reddish-brown sediment and visible river channels.

Lateral channel migration is particularly evident in the approximately 8-kilometer (5-mile) wide active delta at image upper left. The reddish color of the fresh sediment may indicate a change from the sources that formed the older parts of the deltas. It might indicate weathering and soil formation on the older deposits. It could even be a sign of episodic inputs of dust or other material to the river catchments.

Astronaut photograph ISS027-E-16922 was acquired on April 25, 2011, with a Nikon D2Xs digital camera using a 400 mm lens, and is provided by the ISS Crew Earth Observations experiment and Image Science & Analysis Laboratory, Johnson Space Center. The image was taken by the Expedition 27 crew. The image has been cropped and enhanced to improve contrast. Lens artifacts have been removed. The International Space Station Program supports the laboratory as part of the ISS National Lab to help astronauts take pictures of Earth that will be of the greatest value to scientists and the public, and to make those images freely available on the Internet. Additional images taken by astronauts and cosmonauts can be viewed at the NASA/JSC Gateway to Astronaut Photography of Earth. Caption by William L. Stefanov, NASA-JSC.

This astronaut photograph highlights two river deltas along the southwestern shoreline of Lake Ayakum, near the northern boundary of the Tibetan Plateau.