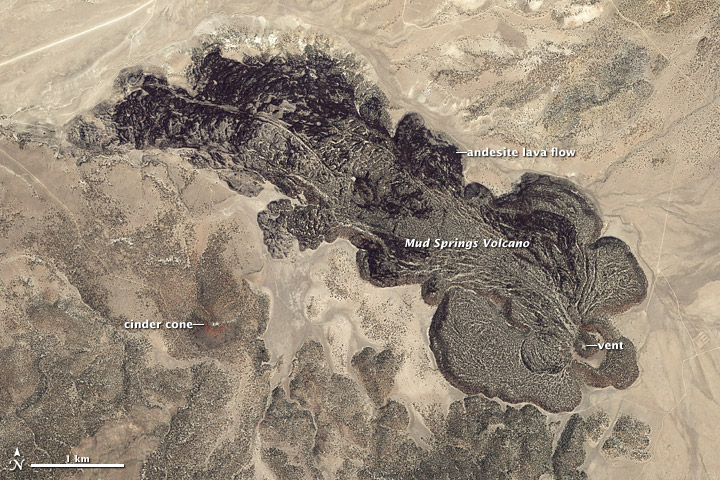 The Aurora-Bodie volcanic field in Nevada includes a series of small lava flows and scoria (cinder) cones that range in age from about 100,000 years (late Pleistocene) to more than 15 million years old. It is part of the Basin and Range province, an area of extensive crustal stretching across the western United States.

The volcanoes of the Aurora-Bodie field erupted lavas ranging from relatively fluid basalt to more viscous andesite. These eruptions produced distinctive thick and bulbous lava flows such as those of the Mud Springs Volcano, the youngest in the field. The lava from Mud Springs extends 7 kilometers (4 miles) from the small vent near the southeastern end of the volcano.

This natural-color satellite image was acquired by Digital Globe’s Worldview-2 satellite on July 5, 2008. The dry Nevada climate has largely preserved the dark lava surface of Mud Springs, even though it is about 110,000 years old. Individual trees are visible on flat areas, as well as on the surrounding, older volcanoes. The basin floor surrounding the volcano is largely barren.

Most of the eruptions from Aurora-Bodie have been small, with an average eruptive rate of 200 cubic meters per square kilometer (20,000 cubic feet per square mile) per year since about 3.6 million years ago. This low rate of activity is evidence that the Aurora-Bodie volcanoes are fed by remelted basalt from the lower crust, rather than a stable magma chamber in the upper crust.