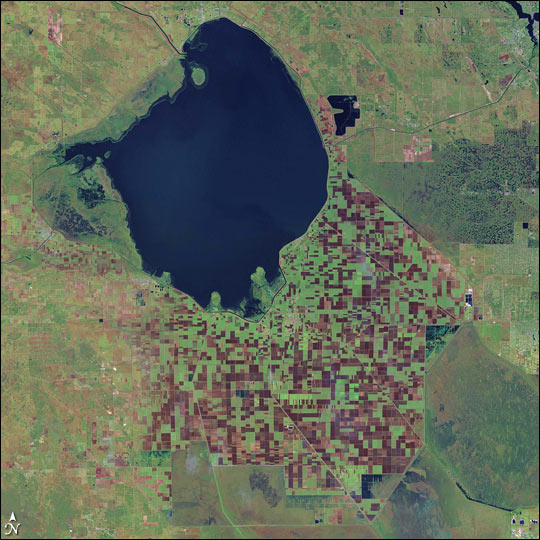 A green and brown checkerboard of agricultural fields rings the southern shores of Lake Okeechobee in southeastern Florida. Located immediately north of the Florida Everglades, the farmland represents a long-developing trend—farmers are moving south to escape the crop-killing freezes of the north.

As night descends over Florida, the land releases the heat it absorbed from the sun during the day and temperatures drop. In the cool of December and January, the plummeting temperature can be devastating for citrus farmers, who can lose their entire crop in a single freeze. To avoid the problem, farmers have been moving south over the last century, draining wetlands as they go.

The change is clear in the above Landsat image, which was based on the 2000 Landsat global mosaic. Smudges of dark blue near the lake and along the outer edges of the farmland are wetlands. In the lower right corner of the image, the wetlands are intersected by straight lines—a sign that at least part of the land has been drained.

Ironically, the draining of the wetlands may have pushed the freeze line farther south. Water is better than land at holding on to heat, which it radiates back into the atmosphere at night. When wetlands are replaced by dry land, nighttime temperatures drop, and freezes become more likely. The link between wetland change and climate change in South Florida was described in a recent NASA and U.S. Geological Survey study, using a careful comparison of historical and present-day land cover along with climate simulations of the effects of these changes. For more information and images, see "Wetland Changes Affect South Florida Freezes."

Image Courtesy NASA/JPL OnEarth, based on the 2000 Landsat global mosaic