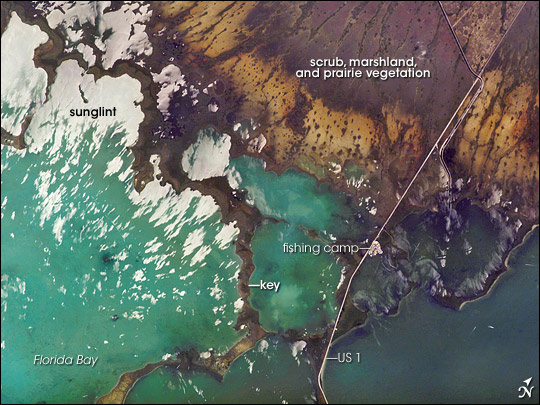 Everglades National Park in southern Florida is the largest subtropical wilderness in the United States. Known as the “river of grass,” the Everglades wetlands and wooded uplands host a variety of endangered species including crocodiles, manatees, and panthers. During the late nineteenth and twentieth centuries, the original 11,000 square miles of wetlands were viewed as useless swampland in need of reclamation. The success of reclamation efforts—for agriculture and urban expansion in southern Florida—has led to the loss of approximately 50 percent of the original wetlands and 90 percent of wading bird species. Today, an extensive restoration effort is underway to return portions of the Everglades to a more natural state and prevent further ecosystem degradation.

This astronaut photograph highlights the southern Everglades, where the wetlands meet Florida Bay. Thin fingers of land and small islands (keys) host mangrove, hardwood hammocks (tree-covered mounds), marsh and prairie (mainly dark to light green in the image). The tan and grayish-brown areas at image upper right are dominantly scrub, marshland and prairie; small green “dots” and narrow lines in this region are isolated mangrove and hardwood stands indicating the general direction of slow water flow toward the bay. The silver-gray regions at image left are water surfaces highlighted by sunglint, light reflected off the water surface directly back towards the astronaut aboard the International Space Station. The roadway forming the eastern boundary of the National Park is U.S. Route 1, which connects the Miami metropolitan area to the north (not shown) with the Florida Keys to the south (not shown). A small tan patch visible along the roadway is a fishing camp.

Featured astronaut photograph ISS015-E-8920 was acquired May 19, 2007, with a Kodak 760C digital camera using a 400 mm lens, and is provided by the ISS Crew Earth Observations experiment and the Image Science & Analysis Laboratory, Johnson Space Center. The image in this article has been cropped and enhanced to improve contrast. The International Space Station Program supports the laboratory to help astronauts take pictures of Earth that will be of the greatest value to scientists and the public, and to make those images freely available on the Internet. Additional images taken by astronauts and cosmonauts can be viewed at the NASA/JSC Gateway to Astronaut Photography of Earth.