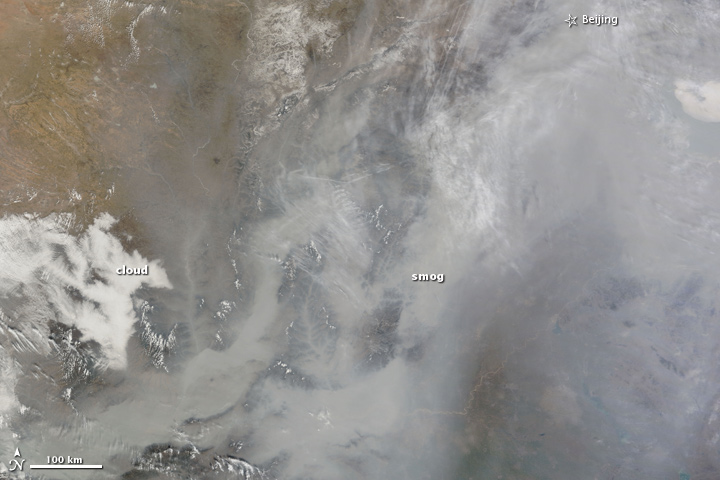 Dense smog settled over the North China Plain on February 20, 2011. The featureless gray-brown haze is so thick that the ground is not visible in parts of this photo-like image taken at 11:35 a.m. by the Moderate Resolution Imaging Spectroradiometer (MODIS) on NASA’s Terra satellite. At that time, a weather station at Beijing’s airport reported visibility of 1.9 miles (3.1 kilometers). Visibility dropped as low as 1.1 miles (1.8 km) later in the afternoon.

Smog frequently builds up in eastern China during the winter when weather conditions trap pollutants over the plain. Haze had been reported over Beijing for much of the previous week.

It is not possible to tell from this view exactly what pollutants made up the haze on February 20, but it probably contains mostly soot or black carbon and possibly some ground-level ozone. Soot is released from burning fossil fuels (particularly diesel and coal), wood, and other biofuels. These same processes also release chemicals that combine in sunlight to form ozone: methane, nitrogen oxides, volatile organic compounds, and carbon monoxide. In China, coal is an important fuel burned in home heating and cooking and energy production.

Both soot and ozone cause respiratory problems and can permanently damage the lungs. Ozone harms plants, which decreases food production. Soot and methane (one of the gases that create ozone) also contribute to global warming. In fact, a UN report to be released this week found that reducing emissions of black carbon and methane would cut global warming in half over the next forty years. By cutting carbon dioxide emissions as well as controlling soot and methane, the global temperature change could be kept under 2 degrees Celsius (4 degrees Fahrenheit) in the short term.

The panel of 70 scientists that prepared the report for the United Nations Environment Program identified 16 control measures, such as installing clean-burning cooking stoves and putting particle filters on vehicles, that would significantly reduce black carbon and methane pollution using existing technologies. The measures would also improve air quality and increase food production, preventing as many as 2.5 million deaths.

Asian countries, particularly China and India, emit the most soot and would therefore see the greatest economic and health benefits in reducing emissions. To read more, see Cleaning the air would limit short-term climate warming, an interview with Drew Shindell, the NASA climatologist who led the scientific panel.

NASA tracks pollution worldwide using a variety of sensors, including MODIS. However, the most valuable sensor for monitoring soot will fly on a new NASA satellite, Glory, which is scheduled to launch this week on February 23, 2011. Glory will be able to differentiate between different types of particles in the atmosphere to monitor the impact of manmade particles, like soot, on Earth’s climate.

Featureless gray-brown haze is so dense that much of eastern China is hidden in this photo-like image acquired on February 20, 2011. Reducing the emissions that cause such haze could cut global warming in half over the next 40 years.

Haze hovered over eastern China in mid-February 2011, perhaps accumulating because of a temperature inversion.