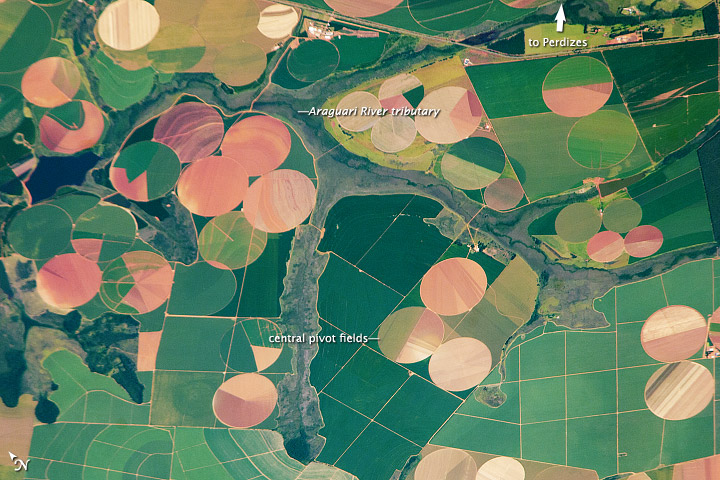 This astronaut photograph illustrates the diverse agricultural landscape in the western part of Minas Gerais state in Brazil. Though most widely known for its mineral wealth, Minas Gerais is also a large agricultural producer for Brazil.

The fields in this image are located southwest of the city of Perdizes, which means “partridges” in Portuguese. A mix of regularly-gridded polygonal fields and circular center-pivot fields marks the human use of the region. Small streams (and their adjacent floodplains) of the Araguari River extend like fingers throughout the landscape.

The visual diversity of the field forms is matched by the variety of crops: sunflowers, wheat, potatoes, coffee, rice, soybeans, and corn are among the products of the region. While the Northern Hemisphere is still in the grip of winter, crops are growing in the Southern Hemisphere, as indicated by the many green fields. Fallow fields—not in active agricultural use—display the violet, reddish, and light tan soils common to this part of Brazil. Darker soils are often rich in iron and aluminum oxides, and are typical of highly weathered soil that forms in hot, humid climates.

Astronaut photograph ISS026-E-25373 was acquired on February 10, 2011, with a Nikon D2Xs digital camera using an 800 mm lens, and is provided by the ISS Crew Earth Observations experiment and Image Science & Analysis Laboratory, Johnson Space Center. The image was taken by the Expedition 26 crew. The image has been cropped and enhanced to improve contrast. Lens artifacts have been removed. The International Space Station Program supports the laboratory as part of the ISS National Lab to help astronauts take pictures of Earth that will be of the greatest value to scientists and the public, and to make those images freely available on the Internet. Additional images taken by astronauts and cosmonauts can be viewed at the NASA/JSC Gateway to Astronaut Photography of Earth. Caption by William L. Stefanov, NASA-JSC.