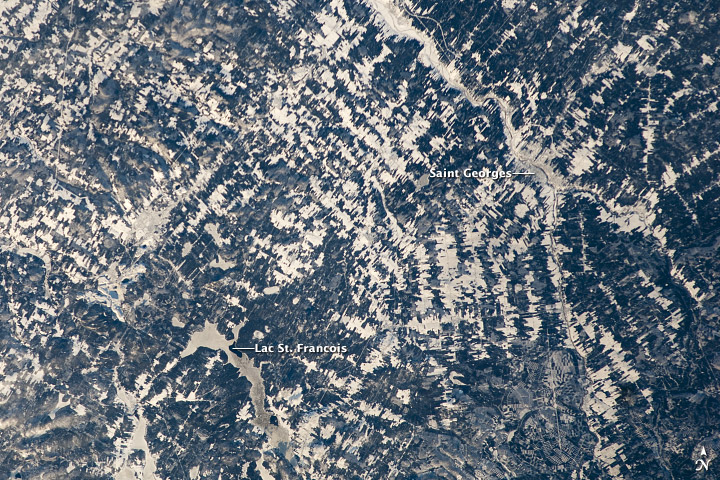 Like an image of a woven tapestry, this astronaut photograph highlights an extensive pattern of agricultural fields in southeastern Quebec, Canada. The region, known as the ChaudiÃ¨re-Appalaches, is located midway between Quebec City (the provincial capital) and the border with the United States (specifically, Maine). Agriculture is a significant component of Quebec’s industries, and more than 50 percent of the food produced or processed within the province is consumed there (as of 2008, according to Agriculture and Agri-Food Canada).

The tapestry pattern is due to the fact that the agricultural fields are closely tied to access roads, with rectangular fields extending outwards perpendicular to the roadways. A similar pattern—embedded within a different social, historical, and economic context—can be seen in the Rondonia region of western Brazil.

Astronaut photograph ISS030-E-19144 was acquired on December 29, 2011, with a Nikon D2Xs digital camera using an 85 mm lens, and is provided by the ISS Crew Earth Observations experiment and Image Science & Analysis Laboratory, Johnson Space Center. The image was taken by the Expedition 30 crew. The image has been cropped and enhanced to improve contrast, and lens artifacts have been removed. The International Space Station Program supports the laboratory as part of the ISS National Lab to help astronauts take pictures of Earth that will be of the greatest value to scientists and the public, and to make those images freely available on the Internet. Additional images taken by astronauts and cosmonauts can be viewed at the NASA/JSC Gateway to Astronaut Photography of Earth. Caption by William L. Stefanov, Jacobs Technology/ESCG at NASA-JSC.