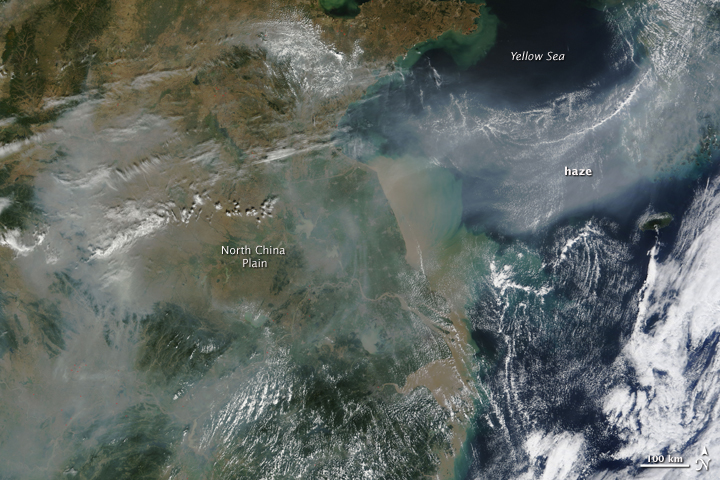 Gray-white haze blankets patches of the North China Plain and the mountain landscape to its south in this photo-like satellite image from October 2, 2009. The haze flows out of China in an arcing ribbon that stretches across the Yellow Sea and covers the Korean Peninsula. Much of China’s haze comes from burning coal in industry, power plants, and households. Burning coal releases both particles and sulfates. Water condenses on the tiny sulfate particles, creating a chemical fog or smog under the right weather conditions.

The haze is a health concern because the tiny particles can reach deep into the lung where they can cause damage. Haze also impacts climate by deflecting sunlight from the Earth’s surface.

The Moderate Resolution Imaging Spectroradiometer (MODIS) on NASA’s Terra satellite acquired this image on the morning of October 2, 2009. The MODIS Rapid Response System provides the image in additional resolutions.

A gray-white film of haze, possibly mixed with some fog, blankets eastern China in this photo-like image from November 6, 2009.