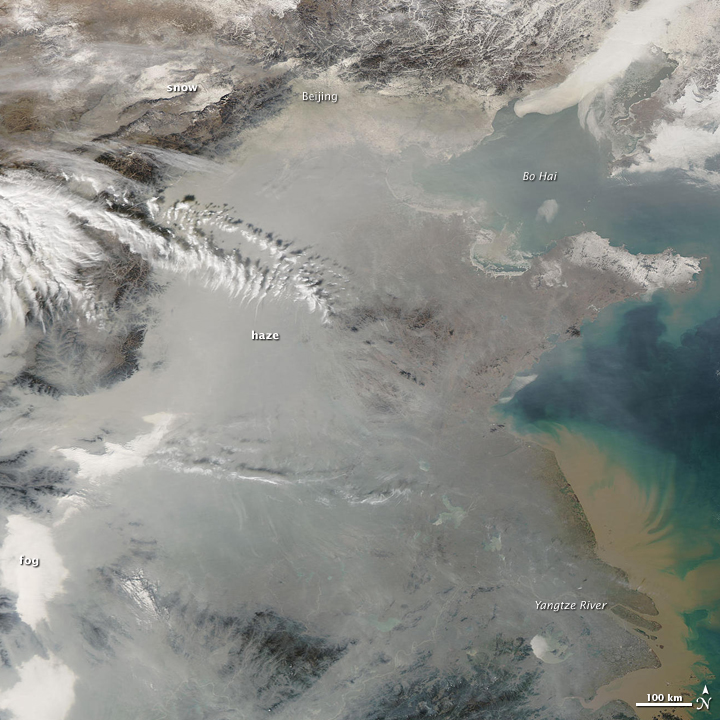 A winter temperature inversion likely contributed to the widespread haze the Moderate Resolution Imaging Spectroradiometer (MODIS) on NASA’s Aqua satellite observed on January 18, 2010. The gray-brown haze extends from Beijing to the South China Sea from north to south and from Korea to central China from east to west (shown in the large image). This image shows the densely populated and industrialized North China Plain between Beijing and the Yangtze River, where the haze is so dense that it completely obscures the ground.

Winter temperature inversions trap a layer of cold air beneath a layer of warm air. The air near the ground cannot rise and mix with the rest of the atmosphere. This means that pollutants build up near the surface until the inversion lifts. In China, most of the pollutants are released from burning coal for power and heat.

Because of the large area shown in the large image, it is only provided at a resolution of one kilometer per pixel. The full resolution image (250 meters per pixel) is available in tiles from the MODIS Rapid Response System.

A temperature inversion—cold air near the ground and warm air aloft—likely contributed to widespread haze over much of China on January 18, 2010.