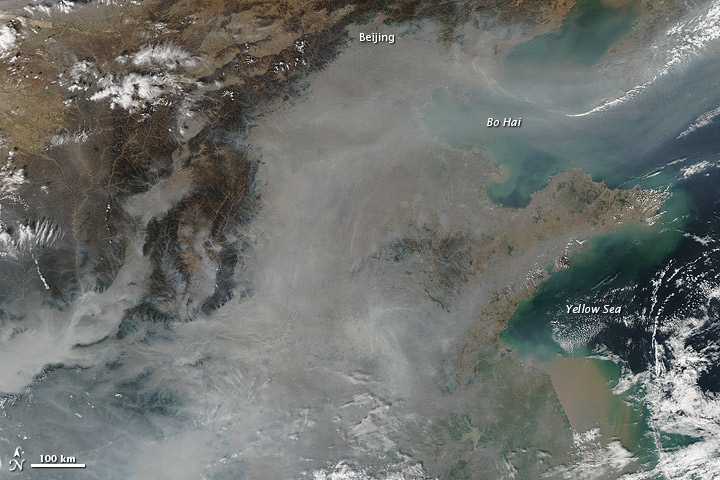 In many places, the haze was thick enough to completely hide the land or water surface below. A wide band of haze extended eastward over Bo Hai. In the west, isolated mountain peaks poked above the haze, which clogged valleys between the peaks.

Airborne particles are often measured in microns (also micrometers): one-millionth of a meter. Particles with diameters of 2.5 microns or smaller—about one-thirtieth the width of a human hair—are believed to pose the greatest health risks because they can lodge deeply in the lungs, according to the U.S. Environmental Protection Agency. The U.S. Embassy in Beijing measures fine particles, known as PM2.5, and reports the measurements though the BeijingAir Twitter feed. On October 20, the same day that MODIS took this picture, reported air quality ratings ranged from “Unhealthy for Sensitive Groups” to “Hazardous.”

In addition to the U.S. Embassy in Beijing, another site, China Air Daily, provides satellite images, ground-based photos, PM2.5 readings, and other air quality readings for multiple cities in China. The ground-based photo of Beijing showed thick smog on October 20, consistent with the heavy haze in the MODIS image shown above. Developed in in response to a growing desire for more information on air quality, China Air Daily is a project of the Center on U.S.-China Relations at Asia Society.