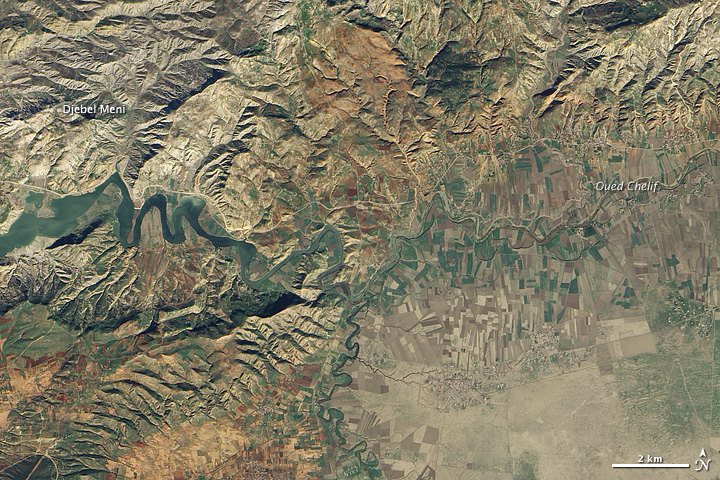 Most of Algeria is desert, home to Saharan sand seas. Along the Mediterranean coast, however, hills and mountains predominate, and mild, wet winters green up parts of the landscape. The Advanced Land Imager (ALI) on NASA’s Earth Observing-1 (EO-1) satellite captured this natural-color image of Algeria’s hilly, vegetated northwest on December 17, 2010.

The Oued Chelif flows westward through this area, taking a meandering path toward the sea, with river banks and valleys lined with vegetation. Irrigated fields—some green, some brown—stretch away from the river, with many fields extending to the bases of nearby hills. Although considerably greener than the desert in the south, this part of Algeria is not exactly carpeted in green. Vegetated areas alternate with bare rock, creating a mixture of green, brown, brick, and beige.

North of the river lies a series of peaks, Djebel Meni among them. The rocks of these hills have proven valuable to geologists in understanding the history of the Mediterranean Sea, specifically a period known as the Messinian Salinity Crisis, or Messinian Event.

Between 5 and 6 million years ago, what is now the Strait of Gibraltar closed. The closing sealed off the Mediterranean from the world ocean, and the region’s arid climate substantially dried out around the basin. Wetter conditions eventually supplied the region with increasing amounts of fresh water.

When Gibraltar reopened, ocean water inundated the Chelif Basin, an assemblage of rock layers in northwestern Algeria that contains a continuous record of sediments deposited during the Messinian Event. Studying the composition and fossils in those rocks has enabled researchers to picture how the Mediterranean Sea reconnected with the ocean. 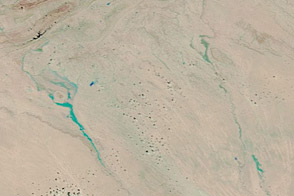