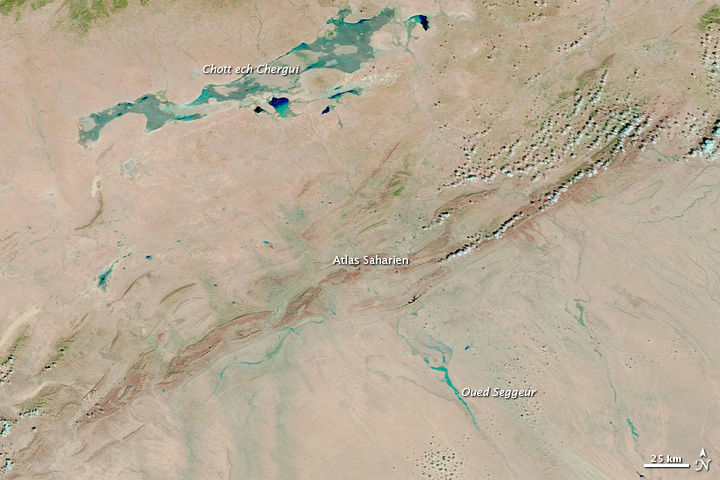 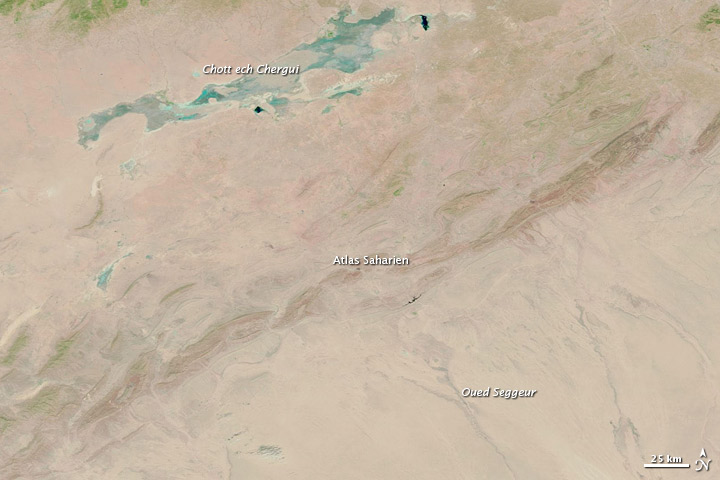 Torrential rains flooded parts of Algeria in early October 2011. The Associated Press reported at least 10 people had been killed, two remained missing, and hundreds of homes had been damaged or destroyed. Reuters reported that roads had been blocked and bridges had collapsed in El Bayadh Province in the northern part of the country.

The Moderate Resolution Imaging Spectroradiometer (MODIS) on NASA’s Terra satellite captured these images on October 3, 2011 (top), and September 19, 2011 (bottom). The images show part of El Bayadh Province. Both use a combination of infrared and visible light to increase contrast between water and land. Water varies in color from turquoise to navy. Vegetation (along the top edge) is green and bare ground is pink-beige. Clouds are pale blue-green and cast shadows.

The Atlas Saharien mountain range extends northeast-southwest through this region. Chott ech Chergui sits on the north side of the mountains. Oued Seggeur is one of many ephemeral rivers, or wadis, on the mountains’ south side.

In the image from mid-September, the river valleys south of the mountains appear dry. In the image from October, they hold water, visible as thin lines of turquoise. North-south streaks of faint turquoise (west of Oued Seggeur) suggest areas of shallow standing water. Water levels in Chott ech Chergui, meanwhile, are discernibly higher in early October.

Algeria often experiences heavy rains in October, according to the Associated Press. The CIA World Factbook explains that floods and mudslides are common hazards during Algeria’s rainy season, but most of the country’s climate is arid. Less than 5 percent of the land is arable, and less than 1 percent supports permanent crops. 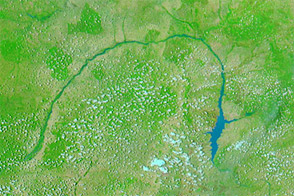 Acquired August 22, 2010, and July 31, 2010, these false-color images show the shift of floodwaters toward southern Pakistan.