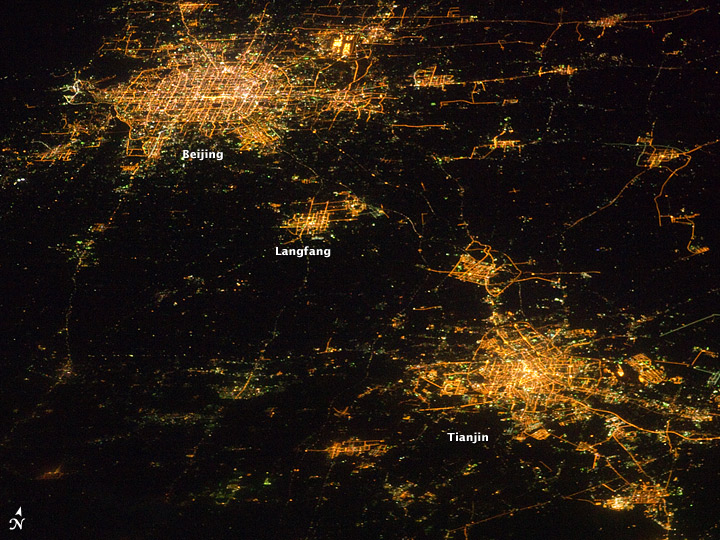 Nighttime images have a way of dramatically revealing the amount of land development in metropolitan areas. This astronaut photograph features two of China’s most populous cities—Beijing and Tianjin—both in the northeastern part of the country near the Bohai Gulf. The United Nations estimated the 2010 population of the Beijing metropolitan area to be approximately 12 million, with the population of Tianjin estimated at more than 7 million.

The smaller city of Langfang, located midway between Beijing and Tianjin, is also clearly visible, as are several smaller developments to the northeast. The dark regions are mainly agricultural fields, with wheat and corn being the major crops.

Beijing (also known as Peking) is one of the ancient capital cities and the current capital of the People’s Republic of China. Its regular grid pattern is clearly visible at image upper left; concentric rings of major roadways around the city have been added as the metropolitan area has expanded. Tianjin is a major trade center linked to seaports on the Bohai Gulf. The city lies along the Grand Canal of China, a major artificial waterway extending southward for 1,176 kilometers (1,103 miles) from Beijing to Hangzhou.

This photograph was acquired by astronauts on the International Space Station (ISS) when it was located approximately 630 kilometers (391 miles) away, over the Yellow Sea near the western coastline of North Korea. The flattened perspective of the urban areas is the result of the viewing angle and distance from the ISS. The city light patterns are very clear, indicating that there was little cloud cover or haze in the region at the time.

Astronaut photograph ISS026-E-10155 was acquired on December 14, 2010, with a Nikon D3S digital camera using a 180 mm lens, and is provided by the ISS Crew Earth Observations experiment and Image Science & Analysis Laboratory, Johnson Space Center. The image was taken by the Expedition 26 crew. The image has been cropped and enhanced to improve contrast. Lens artifacts have been removed. The International Space Station Program supports the laboratory as part of the ISS National Lab to help astronauts take pictures of Earth that will be of the greatest value to scientists and the public, and to make those images freely available on the Internet. Additional images taken by astronauts and cosmonauts can be viewed at the NASA/JSC Gateway to Astronaut Photography of Earth. Caption by William L. Stefanov, NASA-JSC.

This astronaut photograph features two of China’s most populous cities: Beijing and Tianjin.