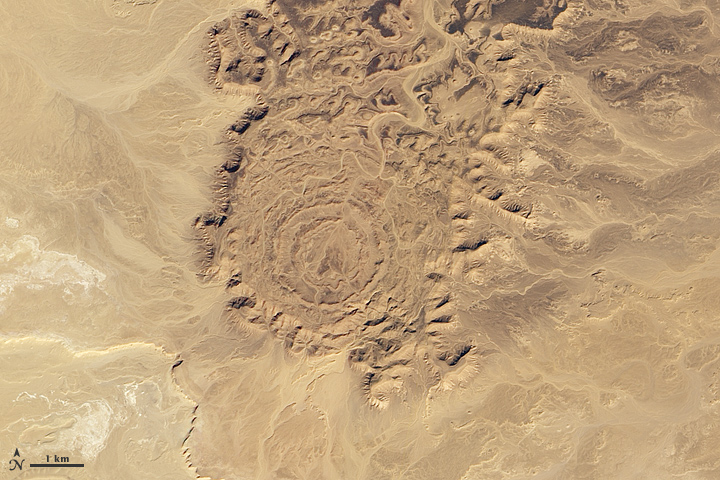 Geologists suspect that Tin Bider is an impact crater and estimate that it was formed in the past 70 million years, perhaps in the late Cretaceous or early Tertiary Period. Spanning 6 kilometers (4 miles), the structure sits at the southern end of a range of hills.

The Advanced Land Imager (ALI) on NASA’s Earth Observing-1 (EO-1) satellite captured this natural-color image of Tin Bider on December 3, 2010. The desert surface appears in shades of tan, camel, beige, and brown. North-facing slopes are in shadow due to the angle of sunlight from the south. That angle creates an optical illusion, making the crater look as if it sits at a lower elevation than the surrounding land. But Tin Bider actually rises above the land to the south, east, and west.

Craters may be simple or complex, depending on the impact that creates it. The elevated position and concentric rings of Tin Bider suggest that it could be a complex crater. The rings likely result from terraces composed of rock that collapsed after the impact. The underlying geology where the impact occurred, however, might also play a role.

Acquired December 3, 2010, this natural-color image shows Tin Bider Crater in Algeria. Spanning 6 kilometers, the crater rises above nearby land to the south.