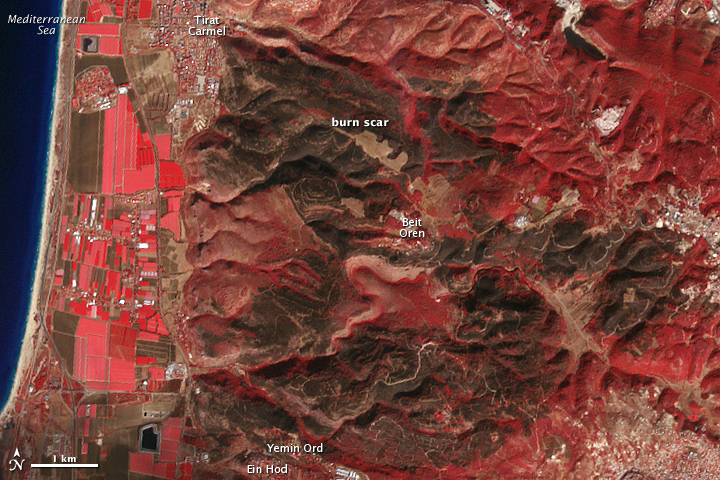 Between December 2 and December 5, 2010, a deadly wildfire swept through the forest on Mount Carmel in Israel. The rare wildfire burned more than 12,000 acres. This image, taken by the Advanced Spaceborne Thermal Emission and Reflection Radiometer (ASTER) on NASA’s Terra satellite on December 9, shows the fire damage. Freshly burned land is black, while forested land is dark red. Cultivated land is light red.

The terrain is rugged in the range of coastal mountains. Silver cities and villages dot the landscape around the burned area. Some of these were damaged in the fire. According to the United Nations, 250 homes were damaged or destroyed, and most were in the communities of Beit Oren, Yemin Ord, and Ein Hod, all marked in the image. At the fire’s height, 17,000 people had been evacuated from the communities clustered around the forest.

This detailed image shows the extent of a large forest fire on Mount Carmel, Israel.

A large forest fire broke out near the Israeli city of Haifa on December 2, 2010.