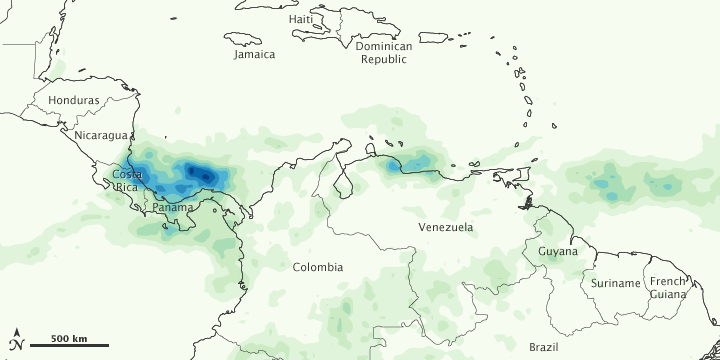 Relentless rain wreaked havoc in Venezuela, Colombia, and Costa Rica in late November and early December 2010. Some 2,000 residents were forced to evacuate their homes in Costa Rica, more than 20 people perished from flooding in Venezuela, and more than 170 people were killed in Colombia, according to news reports.

A band of heavy rainfall runs east-west, skirting the coast of Venezuela, and extending across the Central American Isthmus. The rain is heaviest just off the coast of Panama. Over land, rain is heaviest over Costa Rica. A pocket of heavy rain also occurs along the Venezuelan coast. Venezuelan communities are especially vulnerable to heavy rain where millions of poor residents live in hillside shantytowns along the Caribbean coast, reported Reuters.

Weather Underground reported that Colombia’s rainy season usually winds down by December. The rainy season remained strong in December 2010, however, thanks to the Intertropical Convergence Zone where winds from the Northern and Southern Hemispheres meet and fuel strong storms. La Niña conditions enhanced the rainfall by collecting a large area of relatively cool ocean water off Colombia’s Pacific coast.

This color-coded map shows rainfall amounts over Central and South America from November 25 to December 1, 2010.

This color-coded image shows rainfall amounts in andaround Panama from December 6 to December 12, 2010.