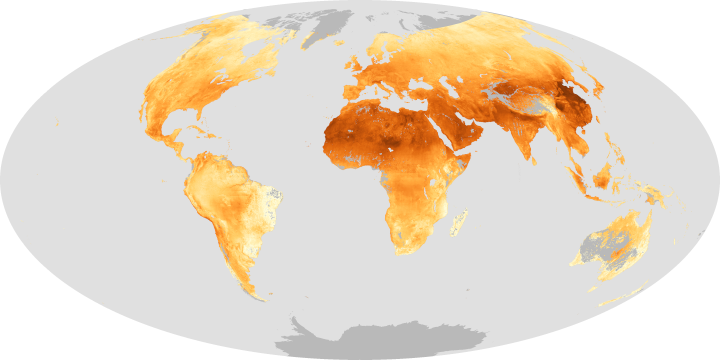 Of all the pollution that fills our lungs on any given day, the most dangerous is the small stuff. Aerosol particle pollution—airborne solid particles and liquid droplets—comes in a range of sizes. Particles smaller than 2.5 micrometers pose the greatest risk to human health because they are small enough to be breathed deep into the lungs and, in some cases, enter the blood stream. These fine particles, about 30 times smaller than the width of a human hair, are also a major cause of poor visibility.

This map provides an estimate of the average distribution of fine particles near ground-level throughout the world. The highest concentrations of fine particles, called PM (particulate matter) 2.5, hover over highly industrialized areas in eastern Asia. The high concentrations over northern Africa and the Middle East are likely fine dust from the deserts. The World Health Organization’s Air Quality Guidelines recommend that concentrations of particulate pollution should not exceed 10 micrograms per cubic meter. When compared with global population, the map reveals that 80 percent of the world’s people live in areas that exceed that value.

The map was compiled from satellite measurements (acquired between 2001 and 2006) and from model data. Both the Multi-angle Imaging SpectroRadiometer (MISR) and the Moderate Resolution Imaging Spectroradiometer (MODIS) on NASA’s Terra satellite measure particle pollution (aerosols). The GEOS-Chem model was used to help researchers determine how much of the satellite-measured pollution was at ground level, where it poses a threat to human health.

Particle pollution comes from a variety of sources, as detailed in the Earth Observatory’s new fact sheet, Aerosols: Tiny Particle, Big Impact. The following is an excerpt.

The bulk of aerosols—about 90 percent by mass—have natural origins. Volcanoes, for example, eject huge columns of ash into the air, as well as sulfur dioxide and other gases, yielding sulfates. Forest fires send partially burned organic carbon aloft. Certain plants produce gases that react with other substances in the air to yield aerosols, such as the “smoke” in the Great Smoky Mountains of the United States.

Sea salt and dust are two of the most abundant aerosols, as sandstorms whip small pieces of mineral dust from deserts into the atmosphere and wind-driven spray from ocean waves flings sea salt aloft. Both tend to be larger particles than their human-made counterparts.

The remaining 10 percent of aerosols are considered anthropogenic, or human-made, and they come from a variety of sources. Though less abundant than natural forms, anthropogenic aerosols can dominate the air downwind of urban and industrial areas.

Automobiles, incinerators, smelters, and power plants are prolific producers of sulfates, nitrates, black carbon, and other particles. Deforestation, overgrazing, drought, and excessive irrigation can alter the land surface, increasing the rate at which dust aerosols enter the atmosphere. Even indoors, cigarettes, cooking stoves, fireplaces, and candles are sources of aerosols.

NASA map by Robert Simmon, based on data from the Multi-angle Imaging SpectroRadiometer (MISR) and the Moderate Resolution Imaging Spectroradiometer (MODIS) on Terra and on the GEOS-Chem model. Caption by Holli Riebeek and Adam Voiland.